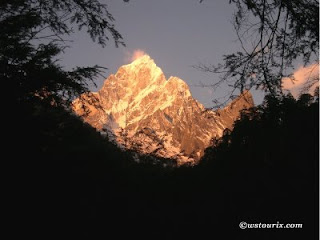 As many of you surly are already aware, a team of skilled Colorado climbers have been late returning home from an expedition in China. The team consists of the burly and seasoned duo of Jonny Copp and Micah Dash as well as film maker Wade Johnson. After a period without communication, these three missed there scheduled return flight to the United States.
The community immediately organized a search and rescue effort from multiple fronts; both here in Boulder and also in China. Last night, local strongmen Nick Martino and Eric Decaria boarded a jet to China with Steve Su and Pete Takeda close behind- planning to leave tomorrow. Search efforts have already begun in the area, however the Asian rescue team has met difficulties that they are not experienced enough to surmount. Nick and Eric have been granted express visa's and will be rushing to the mountains to begin a more technical search.
Copp and Dash had planned to climb a new route on E Gongga or Mt Edgar, a 6,618 meter monster in the Western Sichuan Provence of China. Most recent news has revealed that an unidentified body had been found on the mountain. It is believed that this death is a result of an avalanche, no further information has been made available yet.
I am hoping for the best and sending strength and good energy to both the lost team and the hurried rescuers. I hope that there efforts to quickly make way to the mountain are smooth, and that the weather holds for a full scale search and rescue. The community here in Boulder is definitely effected and has quickly rallied finances and energy to fund this effort. If you wish to donate you can do so at Adventurefilms. I do not personally know Wade, but I know Micah and Jonny as two very happy, enthusiastic, and extremely successful climbers and pioneers of the sport. I am hopeful.
at June 06, 2009