America kicks ass. It's incredible how much geographic diversity this country exhibits. I've been fortunate to have traveled across oceans, too many times to count, and yet I'm still always impressed with my backyard. We've covered a lot of new ground in the last week, and the landscape, communities and stone continue to inspire.

Last week, after Paige put down 'Motley Crux' 14a, I felt a growing sense of urgency as a super hot front was moving into Spokane and we began to feel a bit antsy to carry on with our trip. After a restful day cruising Spokane and tirelessly rehearsing beta in my head, we returned to Deep Creek. It was a bit of a rainy day, but I knew it could potentially be our last 'good' day of weather for a while. 'Problem Child' (14c) was testing many of my weaknesses and with my number of attempts approaching double digits, it had already taken me more effort than any other 5.14 in well over a year. With moisture in the air, time pressure mounting and it's difficulties obvious, I was definitely nervous. It's no surprise that I had a horrible first burn (nerves KILL redpoints), and after being lowered I was not optimistic. Paige inspired by chucking a flash on the pumpy, fun, 'Masochist' 13b and pep talking me back down to reality. Next try, the Problem Child cracked and let me summit. It would be a lie to say it felt easy- it was every bit as hard as it felt days previous. I was stoked, relieved and pumped. On a high, I immediately turned my attention to the pump-fest, 'Motley Crux' 14a. I had given this route a half assed attempt a few days before, in a state of total exhaustion. Paige gave me running beta as I chugged for the anchors and managed to send. I cooled off with a repeat lap on 'Masochist', completing one of my best climbing days ever. 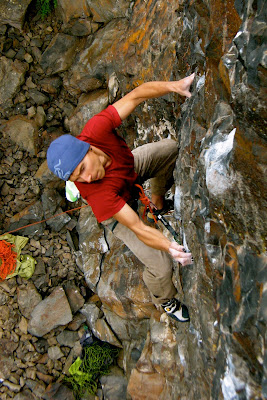 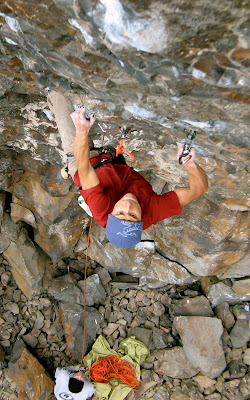 After one last mellow day in Spokane, packing up and saying goodbye to our friends and hosts Tana, Liberty and Marty we hit the road into Idaho- first stop would be the limestone ampitheathre high above the popular white water destination of Riggins. Not sure exactly what we expected, but the 'campsite' was literally a dead end shelf road- there's not even room to turn around. Thankfully we were the first and only car there. I had heard quite a few things about Riggins, primarily the rumors that it was super chipped, but that the climbing was fun. I expected a couple drilled pockets... but never have I ever seen such a display of manufactured routes- these climbs are literally 60-90% manufactured. Even the warm ups, the 5.11s, are manufactured.. You can't help but to be disgusted- however, we were there and if nothing else, it could be a learning experience. The movement, albeit obviously created by a taller person, was interesting at times, but it was hard to take your mind off the hopelessly chipped holds. I did 'Boo' 13b and fell heartbroken from clipping the chains on 'Yellow Man' 13+ when a hold broke. We were less than inspired.. so we packed up and bailed. 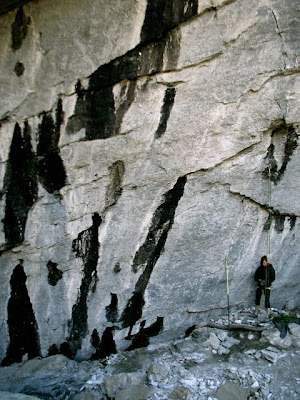 Paige, not SUPER psyched at Riggins

We took the long road to Sun Valley, camping off the road and enjoying some hot springs on the way. The next morning we explored the Sawtooths and hiked around beautiful Ketchum, Idaho to relax and celebrate Paige's Birthday. I had yet to see much of Idaho, but it only took a couple days to appreciate it- it's wild, big and diverse. Soon after we hooked up with our friends Beau Stuart and Steph Carter.. these guys BLEED Idaho. It's in their veins, and it was in their hearts to give us a proper tour for the next few days. Just a little ways south of Sun Valley is a totally unique crag buried in the middle of no where. We parked the car on a random road with little sight of even hills in the vicinity. Beau tromped off through the sage, encouraging us to follow, although it appeared as though we were hiking into a featureless desert. Suddenly a hole emerges in the ground and below the surface shelves of basalt are eroded to create an incredibly steep, juggy and *sharp* climbing experience. The area is small so we sought to finish off the crag, which in the end was cut short by the pain our palms were subject to- it's sharp! We managed to flashed the fun, long pumpy 13a (name?) and sampled all the hard 12s there. 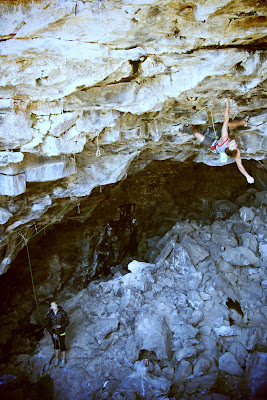 That night we carried on Eastward towards a remote limestone area that Beau had been raving about for years. The Fins is a striking wall of towering limestone high above Craters of the Moon Nat. Park. The limestone here is bullet, and adorns the hilly landscape like ribbon on a christmas tree- there is TONS of stone up here. I was impressed. The larger wall at the developed area is massive, and definitely has space for some epic pitches. The angle is dead vert, but the climbing is generally difficult. I onsighted a nice 13a (name? sorry!) on the upper wall, sampled a number of the great 5.12 there and managed an onsight on a bomber 5.13 called 'Bushido' (i think...?). It was fun to spend some time with our friends and enjoy the unique solitude of this area- I'm quite inspired to return with a drill.. 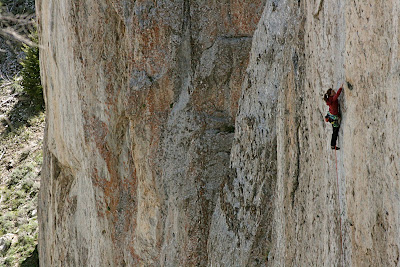 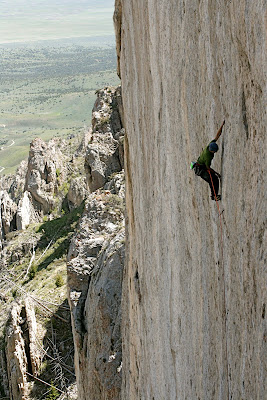 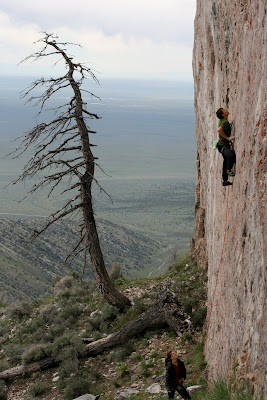 5.13- at the remote and beautiful Fins. Steph Carter Photo 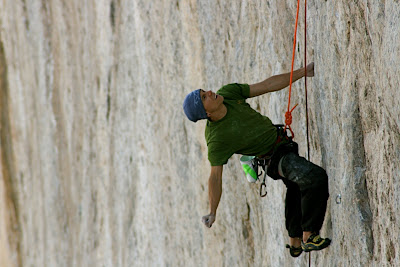 After a killer day at the Fins, we shot our way towards Jackson, Wy, where we crashed for a night with our good buddy Katrina, and quickly packed up for a rest day driving through Yellowstone on our way to Ten Sleep. I feel slightly more American for having seen Old Faithful erupt, although the degree to which Yellowstone is overrun with tourism probably removed that sliver of freedom- it's INSANE there! Literally thousands of people stood around watching the geyser. whoa.

We've made our way to Ten Sleep, finishing off our trip right- on killer limestone deep in the wilderness of lovely Wyoming. We can see the end now- it's only a half days drive away. The thoughts of heading back are sweet and sour- Boulder is not such a bad place to call home, but the inspiration and excitement that comes with being on the road is unparalleled.. I'd say I'm officially addicted. With only a handful of days left, we're ambitious to make 'em count- stay tuned!

BIG PROPS to Steph Carter for donating some killer images. Girl has got SKILLZ!