I've been in and out of Salt Lake enough in the recent years that it's starting to feel pretty dang familiar. I've got my own little favorite coffee shops, grocery stores and parks... hell, I could maybe even give the occasional (poor) directions. I've really come to enjoy a few days in Salt Lake here and there and this most recent visit was no exception. 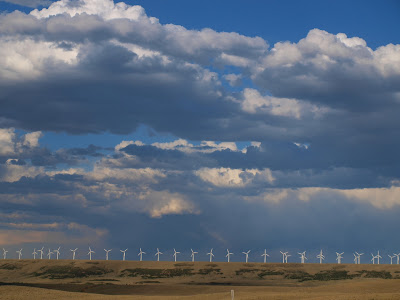 In addition to having a productive and enjoyable time at OR, I also got to spend some time with my old Thailand crew. Josh Morris and his lovely wife Kat of Chiang Mai Rock Climbing Adventures made the trip over to the states for the show and as always, it was a pleasure to catch up. I also got the chance to sit down with his brother and a good friend of mine, Dan Morris and ask him a few questions about his lengthy career as a photographer - I'll be featuring this, and many more interviews with interesting and psyched individuals throughout my travels on my new Five Questions page - stay tuned! 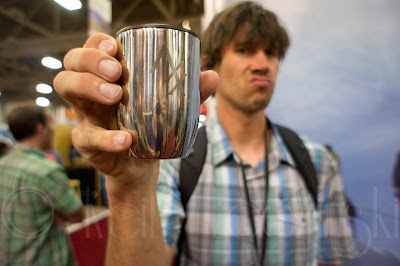 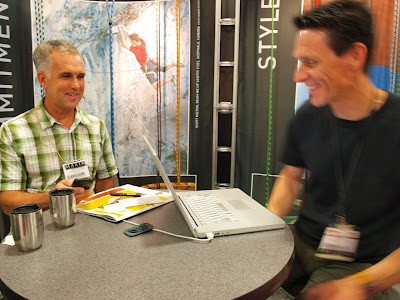 Steady kickin' it at the Maxim booth 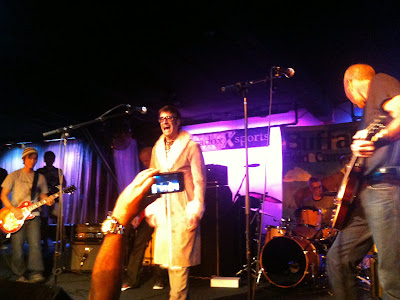 Marshal Balick raises some hell at the Industry Jam
As for the show itself, I stayed busy with friends across the industry and was very much impressed with all of the new gear for 2012. Arcteryx is re-releasing one of their staple alpine packs and one of my favorites, the No-Zone, along with a slew of new active wear, especially for women (check it out!). They are also releasing the world's first hybrid Pro-Shell / Pac-Lite Gore jackets, somehow, once again finding a way to dramatically improve an already stellar line of parkas. I'm SUPER excited about Maxim Rope's release of the incredible Airliner 9.1 - a new and improved version of the Apogee. I'll be writing up a thorough review on this cord soon - it's skinny, and shockingly burly. Metolius has redesigned their awesome Safe Tech Helmet, and have a couple rad new crash pads as well. Keep an eye out for their special run Access Fund chalk bags with very cool graphics. I'm still a huge fan of the simple, lightweight and sturdy Inferno Quickdraws, which are now shipping with rubber JIGS installed. Sportiva has seriously upped their game once again on the approach / running shoe front. The re-designed Exum will have a more aggressive toe box, combining the benefits of the Ganda with the versatility of the Exum (...the best approach shoe ever created). Their featherweight Vertical K running shoe will be an awesome summit/wall shoe as well... sick.

I tried to break up hours at the Show with a gym session here and there, but really I was just fiendin' to get back to the Hoop - an area just a few hours from Salt Lake that I had visited briefly with Andy Mann back in 09. This time around I went out with homeboys Leif Gasch, Scott Milton and Brian Goldstone, shooting some video for an Arc'teryx project set to release next spring. 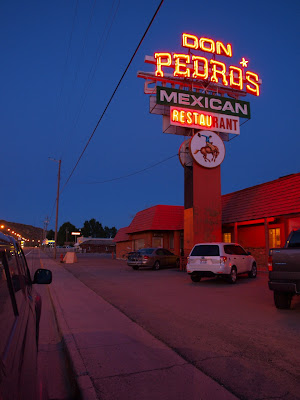 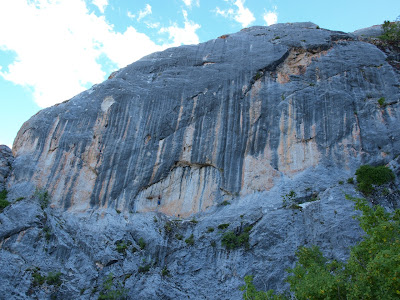 HOOP
It was fun to see their jaws drop when we looked up at this impressive cliff the first morning. I was eager to try this somewhat mystical route called 'Mousse Lick' that I'd eyed on my previous visit. It's hard to gather any info about this cliff at all, let alone specific info about this route - but from what I've pieced together this route (the direct version) and an alternative start were both F.A.ed by Chris Sharma a number of years back, and the direct version had since been potentially repeated by Eric Decaria and Tommy Caldwell (?). The route features very difficult, technical movement between sometimes downright horrible grips. It took some serious brain power, and skin, to simply piece the moves together on this beast. I made a great link on my third burn but was bouted by *slightly* warmer temps - this thing is seriously fickle. With bruised skin and not much time I was fearful that I might not clip chains on this awesome route... so I started planning my return, 'how can I convince Leif to come back next weekend...??' 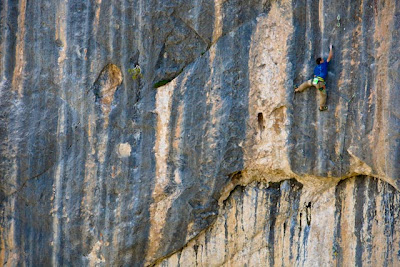 'Mousse Lick' - Brian Goldstone / Arcteryx
I waited out for a breeze or a cloud, hoping that I could get one more good burn in (knowing that day three on this thing would likely be useless). Thankfully, my fourth try proved successful! I'm very excited about this pitch - it's savage, delicate and powerful all at once. I'll cast my vote as solid 14b for this rig (I think my buddy Ethan would agree). It was one of my favorite routes of the trip no doubt. 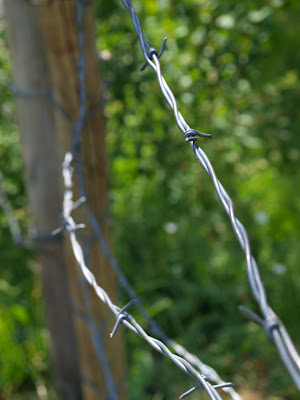 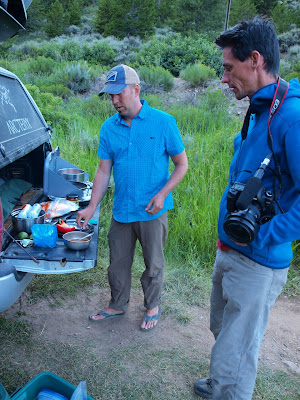 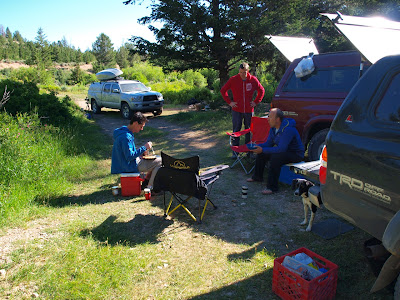 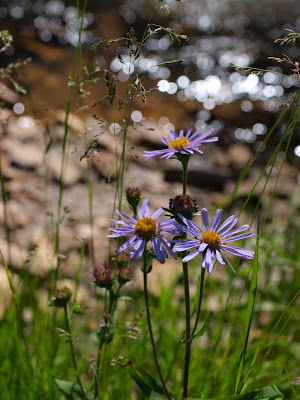 The following day we did a little more video stuff and I punched out a very exciting 13b called 'Out of the Blue', before I hit the road back towards Colorado. It was a ball to hang out with these guys and get some great climbing in. Props to hommie Leif for crushing 'Blue' 13a++ like a champion! Now I'm in Boulder briefly, to unwind before heading to the Western Slope of Colorado for a while. Life is good.