Boulder life... is a good life. I love it here. So many good friends. Stunning mountain runs right out the back door. Thousands of routes, boulders and numerous world-class gyms. The food culture of a metropolis packed into a few square miles. It's a rad place, no doubt. Having lived here on and off for the majority of my life, it certainly still feels like home despite the fact that now-a-days I'm rarely around. For now, it's really nice to be home - but even after a few weeks, I can feel myself getting antsy.... looking ahead to the next trip.


In the meantime, I've been setting routes with a great crew at the Boulder Rock Club, training for the winter, catching up with all of my sponsors and spending time with friends and family. I did manage to get back out to Clear Creek a little while back and add a very obvious link-up to the Wall of the 90s - climbing the bottom boulder problem of 'Mission Impossible' into the upper boulder and crux of 'Interstellar Overdrive' 13d. This produced a pretty direct line up the wall, that climbs through perhaps the best rock there. Usually I'd say, it's a link-up -- locals / bored climbers only style -- but this might be the best line on the wall, so I think it's worth checking out. I suggest Mission Overdrive is a full number grade below Mission Impossible, so 14b? It feels harder than Primetime to Shine to me. Okay, there's my one link-up for 2012. I've got a few video clips of this cool route, which La Sportiva will be posting on their YouTube channel here soon - I'll let you know.

It was cool to revisit Interstellar - a route that I did 5 years ago - it was my second route of the grade at the time. It's crazy to me when I really stop and think it over... climbing has changed my life. I'm in such a different place than I could have ever imagined 5 years ago. And moreover, I've not really been climbing for that long, so I'm always looking forward to many more years. Or at least I really hope so, I really love this lifestyle, this community, these mountains, and these rock climbs. Here's to many more....

Next on my list of things to attack before the arrival of winter was Seal Rock. An amazing feature in the flatirons that has been on the tip of every flatirons enthusiast' tongue for years. The south face was peered at by local legend Colin Lantz pre bolting ban, but he remained busy elsewhere and the wall didn't see development until post bolting ban when the fearless Matt Samet decided to attempt some of these killer lines on lead - placing strange gear where available and creating some of the boldest traditional leads - likely in the country.

One line - the king line - proved to be even too bolt for him, and he refused to lead it, only top roping the feature which he called 'Choose Life' for obvious reasons. Well Matt has been pioneering the efforts to work with the City to open and expand bolting in the Flatirons, which has been a slow, but very worthwhile process.

After the City gradually allowed development again on Seal Rock, Matt applied and bolted Choose Life, which is unquestionably one of the best lines in the front range. With some great beta from honemaster Jim Redo I flashed this old / new classic 13d. If you climb into 13+ terrain I would not miss this one. I also solo quested up the east face and dropped a rope over the steepest, longest section of this wall, exploring and searching for another line - which I'm in the process of applying for. Should be a RAD collection of hard rigs up here in a few years. Again - it takes time, but we're stoked!

Okay lastly, a few things going on around here. I did a nice interview with Mountain Gear to promote the upcoming Red Rock Rendezvous which can be seen here.

And thanks to the BRC, Maxim Ropes and Arcteryx, Andy Mann and I will presenting a free showing of our film, Viva La Vie at the Boulder Rock Club, 7:30pm on Thursday, December 20th. There will be free beer, swag, and a raffle benefiting the Access Fund. Plus a rad film and some cool slides and stories. Come join us! 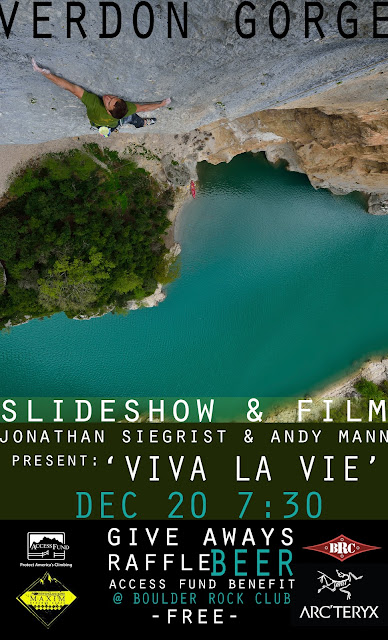