West Virginia showed me a good time. I was just about as blown away as I expected by the New. The rock there is nothing short of incredible. The people are great, the scene is fun and certainly more 'livable' than the Red in my opinion. It gets a little rough spending months in the Red in my experience but I imagine being much more content in the cozy town of Fayetteville. As with most crags out east - if only we could give them Boulder's weather - they would be some of the best areas on the planet... but the weather out there sucks. No need to sugar coat it - even locals know the truth. 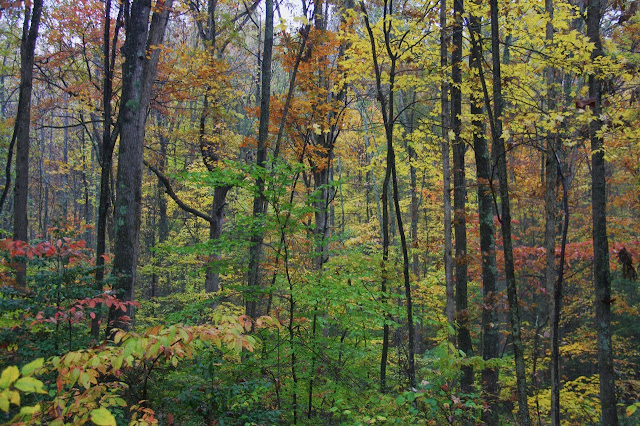 That's why I wound up in Colorado a few days early... it was going to be a gamble to stay into the weekend and I risked a few more rainy, humid, warm, no climbing days. So I cashed out after a few last great days of climbing and one last great trail run through dense forests and low lying clouds. Good trip, very excited to head back.

As soon as it really felt like Fall had arrived we got into some great climbing and a few days conditions were near perfection. I spent a number of sessions at the amazing Cirque - the crowning hard cliff at the New. 'Trebuchet' 14b was a must do, and is a really cool roof and headwall extension to it's lower half of the same name. A few powerful and creative moves through a big roof give way to some easier deadpointing and pumpy, crimpy finish. 'Freedom Tree' 13d celebrates some fun jug hauling to a thuggy dihedral finish that's very reminiscent of Rifle. This one in particular had an enormous move out of an undercling that required yoga-like spine stretching out of me for success. The boulder problem entering the dihedral was the sure crux for me, although a taller climber would disagree. A killer route. Over at Beauty, 'Ruchert Motion' is a rad overlooked 13a, and around the corner 'Coal Train' 14a is one of the best in the East. Truly immaculate stone with incut edges and mind bendingly awesome movement. Pumpy throughout with some fun crux climbing. As my trip was nearing its end Mikey suggested we take a chance in some potentially warm conditions for me to have a go at Proper Soul before a formidable storm came in. He was absolutely right. The day was not perfect but the storm that sent me westward would have shut down my attempts. I had wanted to give a good flash go at 'Proper Soul' 14a for the last few years, and after a proper spray down from Mike I gave er hell. Unintentionally smashing hordes of ladybugs and battling some pretty serious heat I nearly let it rip using some on-the-fly beta exiting the crux dihedral but managed to stay on and take it to the top. This was, in some senses, the goal of my trip - so naturally I was super stoked. I finished the day on the neighboring 'Lord Voldemort' 14a and unknowingly packed up my final day in the New.

It's funny how much the conditions, your height, and your strengths really affect the way you climb at the New. In the beginning of the trip I was confused and frustrated, but as I moved through the days at the crag - finding routes that suited me better or worse, climbing in crisp 50 degree, dry, breezy awesomeness as well as muggy, drink-out-of-the-sky humid 70+ degree days - I eventually gave up on grades or difficulty associated with them. More than any crag I've ever visited, the grades are straight messed up here. Several '5.12's took me as many or more tries than '14b'. I was only somewhat kidding when I proclaimed that sending Freedom Tree 13d was the hardest I'd tried all year and there was a single, super reachy move on Coal Train 14a that keep me coming back 3 days through a variety of conditions, trying hard to finally send. Moral of the story? Toss out the idea of functioning linear grades, especially if you're under 5'6, and just climb what looks awesome - they're all good and they're pretty much all hard - even the 5.11s!!

Well, so now I'm back in Boulder hanging out with family and friends. This past Halloween weekend I easily made up for the sleepy life of Lander, Idaho and Fayetteville throughout my summer - and I'm still recovering from a collage of late nights.

In a few days I'm heading back to Asia for the first time in several years. This time, however, no climbing shoes in my bag. Yup. Climbing is a huge part of my world, but it's not everything. This will be the first non climbing trip - and the longest stretch of rest - that I've had in 7 years! Wish me luck...