It's been about a month of bouldering. So much learning... I know what to expect in the Bear Lake parking lot. I know the trail to Lake Haiyaha too well.  I've met so many new people - almost an entirely different crowd than the sport climbing scene. I've acquired some power, I've fallen on my ass (x1000), my eyes have opened considerably. I can find my way around the boulders and even sometimes give others directions. The best outcome is that I've grown a considerable appreciation for bouldering, this specific corner of the Park, and furthermore I've really enjoyed myself. 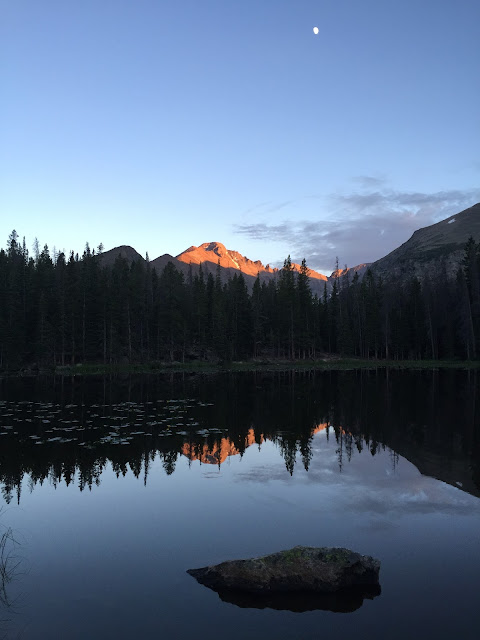 Rocky Mountain National Park is truly the best venue for bouldering I've ever experienced, and Upper and Lower Chaos are down right stunning environments, just to be in. Add friends and motivation and a purpose to explore... this is a world class destination. Every day I've been up there I've felt blessed and stoked. To make things better I've even been doing some climbs too.

I set a very arbitrary goal in late June to try and climb a dozen V12s or harder before the Outdoor Retailer Show in early August. This is nothing more than a week's effort for bone crushers like Daniel, Jimmy or Dave but for me it felt like a formidable challenge. Especially considering that previously I had climbed only a couple V12's, ever. Doing the Automater V13 with relative quickness was hugely motivating, but it was still more or less a short, hard route. So I aimed for some pure boulders, like 'European Human Being' V12, 'Secret Splendor' V12 and 'Nothing but Sunshine' V13. These problems are less than 6 moves, and hard. These really opened my eyes to the more aggressive boulders around, and encouraged me to try one on the top of my list, Jade. 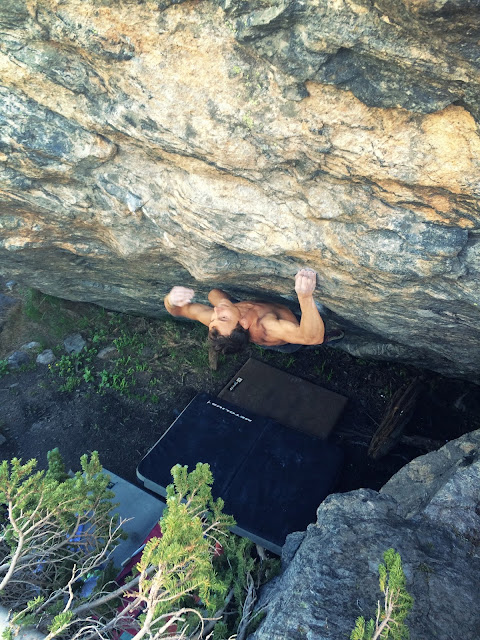 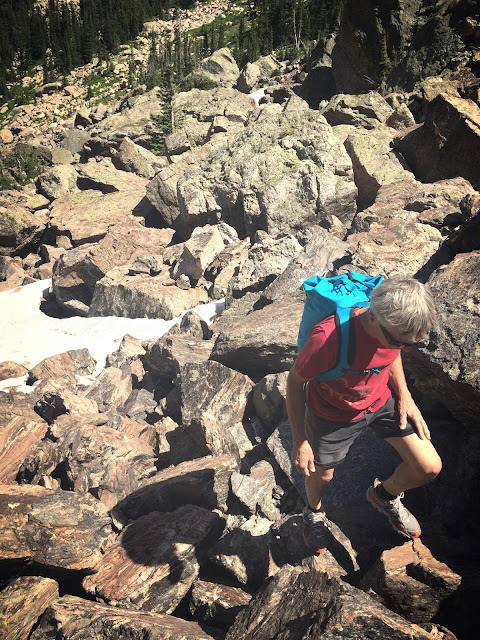 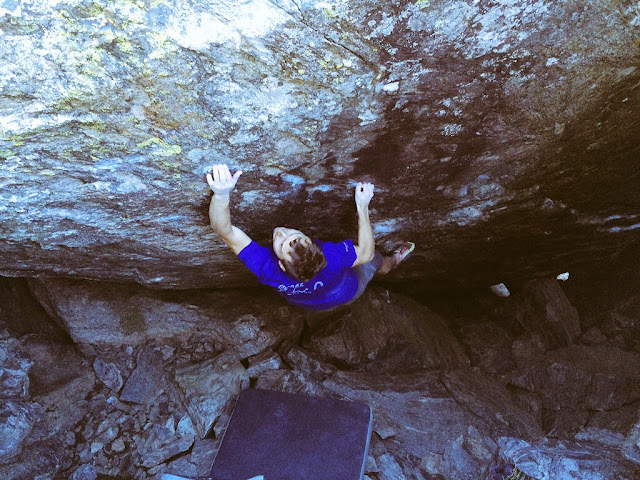 At first it was a bit of a battle to refrain from tying in. I wanted to get pumped so badly, but I stuck to the program and really tried to focus my energy on the bouldering life. Aside from a week of sour weather and a long weekend traveling, I have been in the Park 4 days a week all month. Things have really started to click for me in the last week, and especially in the last two days. 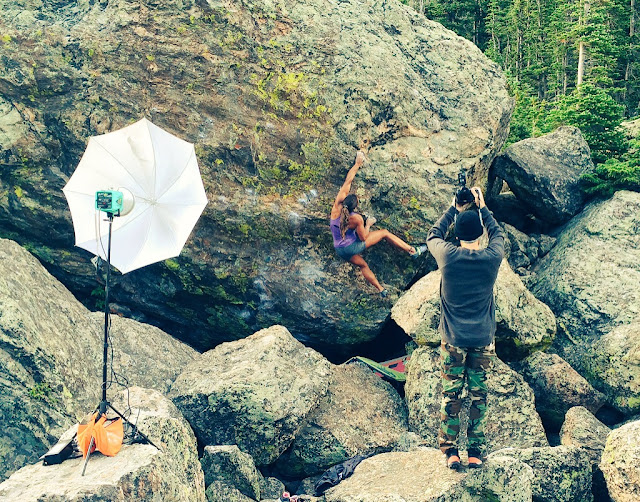 On Sunday I climbed Jade. A problem that I have heard about since it's genesis in 2007. I never ever imagined climbing this problem and was skeptical even after trying it for an hour. In the moment I knew what needed to be done, and it was only a matter of forcing my body to exert itself near maximum. Doing the crux was a strange feeling that I've really never experienced before. Being so on the verge of failure and yet simultaneously feeling in complete control. Encouragement from friends, outstanding conditions and very low expectations lead me to the summit. It was... surreal... and very motivating. 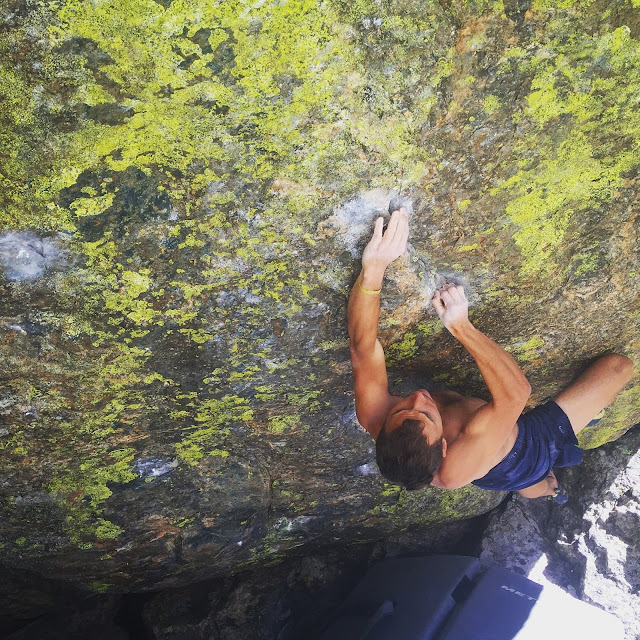 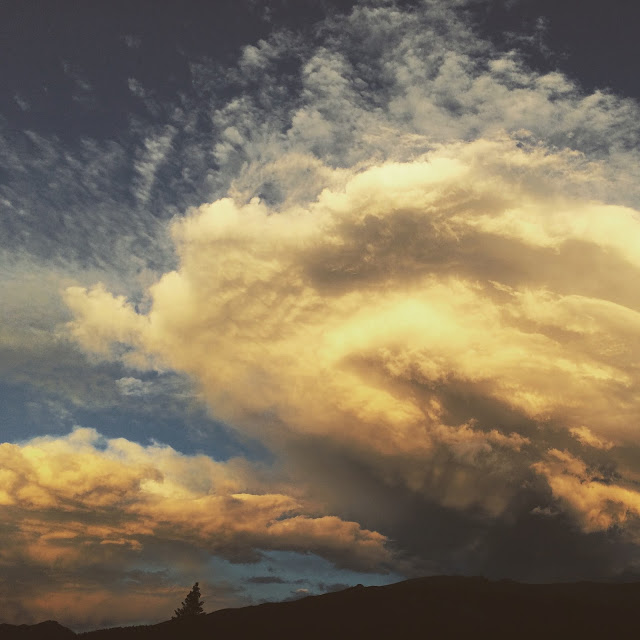 Jade was number 9 on my list after 'Automater' V13, 'Element of Surprise' V12, 'Nothing But Sunshine' V13, 'Centaur' V12, 'Freaks of the Industry' V13, 'European Human Being' V12, 'Secret Splendor' V12 and 'Riddles in the Park' V12. Yesterday I returned to the Green 45 in search of number 10. 'Wild Cat' V12 was especially hard for me but I fought through it with a spot and support from my Dad. On the other side I started fooling around on 'Don't Get Too Greedy' V13, and give it a successful rip during a horrendous gale wind. It's one of my favorite problems that I've done. I've got one week of bouldering left. 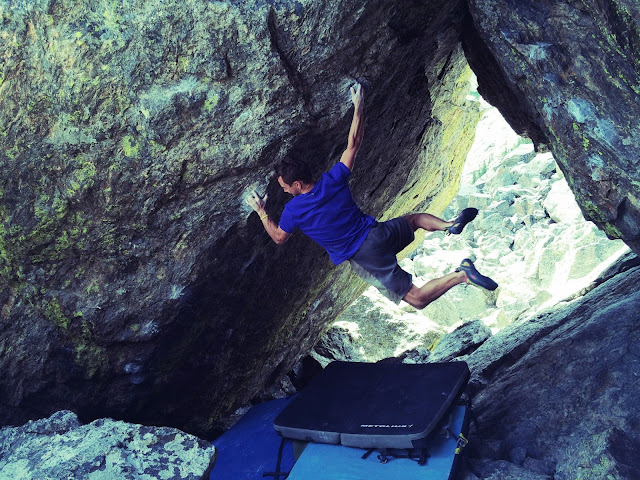 Don't Get Too Greedy

Originally my hope was mainly to improve my power, and hopefully improve my chances of success on this fall's mission back to Spain. Somewhere along the way I started really liking bouldering, and while it still feels like practice, I am for sure planning another month of it next year. Yes, pretty stoked!

If you happen to be in the Estes Park area next month, come check out the Rocky Mountain Rendezvous on August 15. I will be presenting on my spring in Spain and this last month of bouldering, including many videos and photos and laughs! so yeah. Come and drink beer and enjoy!