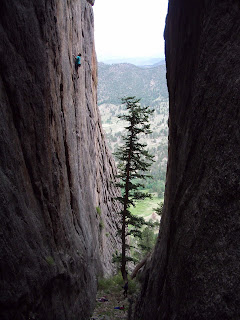 Just a few days from spring.. don't believe me? I suggest you check your watch when the sun sets and don't bother with wearing long sleeves, or for anyone else that needs convincing, check your calendar 'cause this Friday (the 20th) is the first day of spring. I could not be more excited. Marisa and I, along with a gang of hard-cores and friends from all over are heading up to the dolomite haven of Sinks Canyon. I have never been, but it has been a destination near the top of my list for a while now. Besides terrifying rumors of a mass rattle snake migration that is reminiscent of a ophiophobia's worst ever conceived nightmare, this area sounds fantastic. I am super excited about enjoying 9 days out of town, with good friends, camp fires, cheap wine, filthy dogs and pocket pulling- want to join us?!
'Round the front range, some exciting sh#t has been going down. On a quick trip, Kevin Jorgenson established a fantastic looking new V12 in Eldo called the Heist that is 2o some steep power moves with a slab following behind you for what is probably the safest thing he has ever done. Matt Samet and Ted Lanzano have been busy working up new routes and applying for older ones in the beautiful Flatirons. Remember applications for bolting deadline is march 15 - oh crap that was yesterday!! well I guess its June 15th then. Either way, stay in the loop for the voting and approval process.
Lastly, Boulder film maker and photographer Brian Solano, along with Eric Perlman and Mike Call all premiered their new films last week at the Stone Alliance Tour. My quick review... Masters of Stone VI: Definitely interesting to see something fresh in a movie like this (speed climbing the Nose) although I would not toss in this movie to get stoked, it was different and cool. I can't believe Eric is still making films!! Herakleia: Mike Call takes us to Turkey and one of the bigger boulder fields (in the world?) for some hot (literally) action on fresh boulders. Nothing extra ordinary in this- other than the new landscape, but enjoyable. The Players: Brian Solano does skate-movie style mini-sections on a number of da ballers in the game (Sorry I had to do it- it is a little cheesy at times). I like the idea, and the footage is unique- except Kryptonite, I hadn't seen these climbs in a film. I imagine the full version is rad (these were just short versions of all the movies). Anyways- all films are worth checking out.
Photo: Ben Randolph on 'Dakota' at Lumpy Ridge
at March 16, 2009