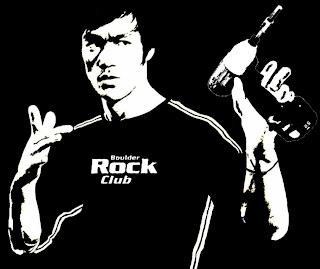 For almost three years now I have been a Boulder Rock Club route setter. I take a lot of pride in my craft and really enjoy the process of creating a route. I often leave work without filling out my time card because I am too busy rehearsing moves or examining potential flaws of my routes. To me, this is a sign that I must like my job.
The past few weeks at the BRC have been a bit crazy in that we have been remodeling the older portion of our wall. This wall was built by Eldorado Wall Company in 1995, and to our knowledge was one of the oldest standing commercial walls in the country. It was finally time for an upgrade.
Anyone who has worked as a route setter knows that comps and other indoor climbing events take a staggering amount of labor to put on. Prep days typically start way too early and seem to never end. Well, this was definitely the case for the BRC crew this past week. We freakin' slaved Monday, Tuesday and Wednesday. We finished t-nuts, set a copious amount of quality routes, installed flooring and quickdraws. My buddy Seth and I woke early after setting until midnight, only to forerun and tweak all but a couple of the 32 routes the team set over a 36 hour period. We actually did a jumping chest slam with one another in celebration of our bad-assed-ness.
The result? A killer opening night for the remodel. New routes throughout the room at all grades, and a fresh look and feel for a once aging wall. Come and check it out if you have a chance, we are all proud of it.
This hard work was great for many reasons, but most notably it forced me to rest from climbing. Taking extended rest (more than 2 days) is important but terribly difficult for me. I especially needed some rest after my finger/hand injury last week, and building routes all day was a form of rest, I suppose. But, alas, here I am one week ago I had just injured myself and now my hand is feeling 90%. I remain hopeful to send when I return to Lander at the end of next week.
Thanks for the insight and good energy from all of you who called or wrote. It worked! I'll be climbing pockets in no time.
Lastly.. Sharp End Publishing just released a sample of Steve Levin's new Eldorado Canyon guidebook. I met with Steve a little while back and had a chance to flip through this awesome new guide.. Here, have a look see.
at July 03, 2009