Yangshuo, China. Finally made it out here and I'm completely blown away. A totally surreal landscape of karst towers stretches as far as that days air pollution index will allow the eye to see. Beautiful, 4 sided limestone pinnacles are a dime-a-dozen around here, ranging from slabs to dramatically overhanging and single pitch to 5 pitch monster outings. There truly is climbing for everyone in Yangshuo, although at the moment the peak season has thankfully come to pass and the crowds are virtually non-existent. In exchange for nearly empty crags I've been forced to deal with sometimes crippling cold.. notably crippling based on what I (didn't) pack, expecting the typical Asian December I'm used to over in Thailand.

Yangshuo is a very unique place, unlike anywhere I've ever been. The city itself (pop. around 300,000) has become a booming tourist attraction for Chinese travelers and the downtown area reflects it. Hotels, touring services and restaurants number in the hundreds, 90% of them targeting the Chinese traveler, given that the number of westerners visiting is still relatively low in comparison. Rock climbing in Yangshuo was first put on the international map in 1990 when Todd Skinner, Sam Lightner and Mike Tupper arrived and established some of the still-standing mega classics, including routes like 'Proud Sky' 12a and 'Over the Moon' 12c that climb out the incredible Moon Hill formation. Since then the area has seen a number of rebirths and cycles of popularity- most recently influenced by the very successful Yangshuo Climbers Festival that began in 2008 and then the notorious visit by Chris Sharma earlier this year. It seems like when Chris makes a trip to an area, it is immediately taken seriously.. and for good reason. While Yangshuo is an incredible adventure for any level of climber, the amount of difficult climbing here has increased rapidly in the last few years, with a mind-numbing amount yet to be explored and established. Chris bolted a couple potential 9a/+ routes above the already standing 8 or so 5.14s and dozens of 5.13s. 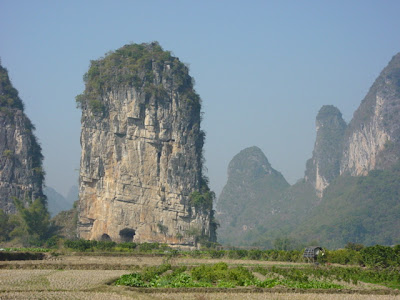 Climbing outside of your 'zone' always takes a little adjustment. Climbing on the otherside of the world can take some serious adjustment depending on your level of caution and desired comfort. The comforts around Yangshuo for a western traveler are pretty damn well established (especially if you're willing to pay), but still, this is definitely China. Being aware of this fact and also traveling on a pro climber (read:strict) budget, I gave myself a couple days to try and get settled in before I aspired to really pull down. Now, over a week into my stay I've got my orientation down well, I know the proper cheap food joints and the appropriate bars.. I've learned the bus system and I'm aware of the secret free entrance to Moon Hill- check. I've even had a chance to get out and rock climb nearly every day, with some success that I'm proud of too.

To kick off my try hard in Yangshuo I found myself at the Banyon Tree crag.. which features a nice collection of many grades including an incredible unnamed Todd Skinner 12b that ascends tufas and jugs for days. This was my first taste of the world class routes that Yangshuo has to offer. I moved directly left to attempt China's first 8b (13d), 'Nine Deep, One Shallow'. I managed a send on my second try of this incredible crimp and compression test-piece. Brilliant, and a great way to get stoked to try hard. 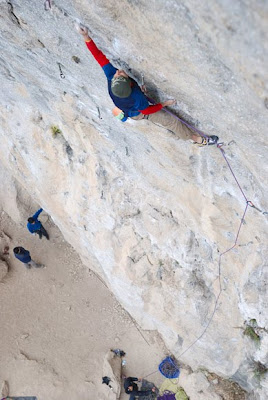 Lei Pei Shan was my next objective, and despite some terribly cold weather I headed out with a gang of good friends from Hong Kong. My good friend Emily Harrington had previously told me about China's first 8b+ (13d/14a) for a while, 'Lightning'. This beast of a climb goes on forever, tackling a technical line of crimps and pockets after the anchors of a challenging 13b. I could count the number of days I'd climbed on a rope in the last month on one hand.. so I knew I would have to step up my fitness game to send this 35 meter route. Happily, I clipped chains on my second try, managing my endurance at every opportunity and not taking any rest for granted. The neighboring route, 'Thunder' 14a was the obvious next objective and properly wore me out at the end of the day, but I was able to get my draws hanging up the 38 meter beast, stoked to return the next day. Thunder begins with an incredible 12c of the same name to a great rest before passing through a super technical crux involving a mantle-ish balance sequence followed by a huge (felt huge to me!) dyno into a sinker hueco. On the following day I clipped chains on my third try total.. feeling like my fitness could be on the return. The following day my buddy Eben and I had a short day at Moon Hill, climbing strictly classics aside from a one-star, mostly dirty 13b I grunted to onsight- pretty unreal to climb upside down for so long.. and pretty freakin ridiculous to clean your draws off of too- this warranted a rest day. 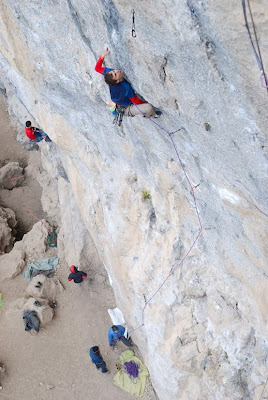 Monday was splitter, and a welcome change to the freezing temps. I got the full on White Mountain tour- which is unquestionably the areas best crag. A massive beautiful wall rises above a sea of orange trees.. no road noise.. little pollution to speak of.. routes from 5.10 to 5.14+... amazing. Nearly perfect. One of the top 5 crags I've ever been to no doubt. I warmed up on a couple awesome, giant 5.12s and quickly followed with a flash of 'Tsing Tao Beer' 13a and 'Gin and Tonic' 13c- both super varied and interesting routes with a wide array of holds from crimps to no-friction ledges up a golden 30 meter+ wall. Feeling good and inspired to try hard I moved over to the far left side of the crag, an overhanging clean white face that overhangs dramatically.. my buddy and local hardman, Abond, turned me on to his route- 'China Climb' 14b. This test-piece features a wickedly crimpy crux and powerful exit moves after some interesting and very fun climbing to approach it. It's awesome. Worthy of all great praise. I fumbled the exit on my second attempt, and clipped chains on my third.. wicked.. after such a great day I was beginning to think my fitness could be returning.. but then I then followed by getting my ass properly destroyed on a 12d called 'Gang of Four'. Ego back down to earth- fully owned on this 'warm down'. 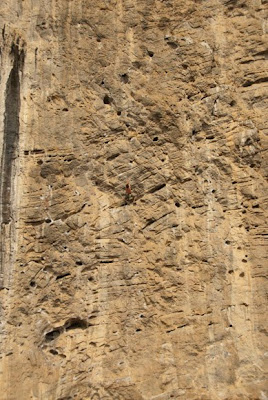 Tuesday we were in a van back to White Mountain and the weather was fantastic. I had my sights set on another White Mountain test-piece called 'American Gangster' 14b. This gigantic (45meters, 23 quickdraws) route features a beautiful gold wall containing great, accurate movement on small crimps and pockets through a lower angle section of cliff. It also features the one and only manufactured hold in all of Yangshuo, a right hand three finger pocket smack-dead in the middle of the business. I had heard that when Chris repeated the route earlier this year he found an alternative sequence that skipped the pocket altogether which the locals have dubbed 'French Gangster'- I was stoked to hold it down for America and completely avoid the man-made hold. After a bit of messing around I found that there is indeed a sequence just a few feet to the left that never touches the pocket (not even for a foot) and even adds some difficult and super cool moves to the already long crux sequence. I was stoked.. and after one hanging on my second attempt I took a long rest and fired the 'French Gangster' third try.

I'm super motivated by my success at White Mountain and eager to return. I've got a handful of climbing days left in Yangshuo before I head to Shanghai for New Years and the weather is looking *mostly* in my favor.. The community here has been fantastic, and I'm so happy that I've had a chance to climb and share a beer with so many great folks. The people at China Climb, and Karst Cafe have been awesome and of course Lily and the family at the Climbers Inn. Respect is due to Bob Keaty and the Yangshuo Access Initiative as well, for many days of hard work, communicating the needs and desires of the climbing community to local farmers and businesses so that we can all continue to have a ball out here. Keep it up guys, this place is truly a gem.

Photos thanks to Bob Keaty and Leo Feng: Typical Landscape at Yangshuo.. Myself on Lightning, Thunder and the massive wall of White Mountain..
at December 21, 2009