Time warp.
Last time I tuned in I had just finished two kick ass, back-to-back days at Yangshuo's best crag, White Mountain. The following day I was ambitious to return and take a crack at one of the two remaining burl routes on the far left side of the mighty cliff. Wednesday was a brilliant, sunny day in Yangshuo and I started off on an area classic, 'The Phoenix' 12b/c, which differs in character greatly compared with the other White Mountain routes I had sampled. Located on the right side, this striking, orange streaked and pleasantly textured route reminded me of a signature Shelf Road technical masterpiece- it was simply amazing in my opinion, and remains one of my favorite climbs in Yangshuo. A couple more great warm ups and I was prepared to try hard. I jumped on the power-house route, 'Blue Magic' 14a, which begins with brutally difficult thuggery- a struggle to escape two slopey pods and explode right to a decent edge before long moves to a rest. From there the route continues through a series of open pockets and a couple edges.. body position is crucial on this very short, ultra steep test-piece. After unlocking the beta to escape the pods, I felt confident in my method, but also fatigued from the previous two days. A fumbled second attempt lead to a stronger third one, and happily, a send. I finished the day with a few classic routes, including the newer, 'Two in the Pink' 12c and 'White Devil' 12d. Little did I know that these would be my last few routes at White Mountain.. 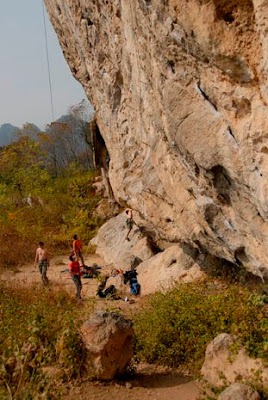 After a well deserved rest day, Abond and I returned with a crew to session on Christmas Day. I was fired up to get a taste of Chris Sharma's 'Spicy Noodle' 14b/c, which I had saved for last. Unfortunately long standing political 'differences' between the two villages just beneath the cliff, mixed with our presence over the previous three days resulted in the closure (a cycle of sorts) of White Mountain. The Yangshuo Access Initiative is working hard to secure the permanent opening of this world class cliff, and updates on the progress can be found here.

While the closure was indeed a full scale buzz kill for my Christmas day, it will most likely be a temporary closure. All in all, I feel STOKED to have had the chance to crag at this place, and at this point I mostly hope, for the sake of the local climbing community and traveling climbers, that an agreement can be made surrounding access to this cliff- locals are very optimistic, so therefore so am I. 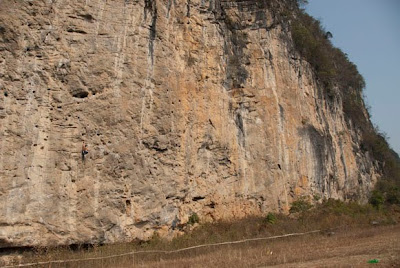 Realizing that my time at Yangshuo was running low and that White Mountain was currently off the roster, I took a second look through the guidebook to find inspiration for my last few days of climbing. Day after Xmas was headed out to Lei Pi Shan, were I cleaned up a couple 5.13s I had not yet had a chance to check out, including a great Scott Milton route (name?) at 13c to the right of Single Life that was surprisingly rad.. offering a short, albeit engaging crux. Another super long (45+m?) 13b/c route called 'No Guarantee' offered a wicked pump along with some grueling rope drag. I even had a chance to open a new route, bolted by my buddy Andrew, called 'Black Cloud Dreams (something like that?)' at 12+, to the left of the main wall at Lei Pi Shan. New routes and undone projects litter the crags around Yangshuo, and the process of either bolting your own or grabbing someone elses (open only of course) is almost an essential part of any visit to Yangshuo. Apparently I opened another 12c at Banyon Tree as well, bolted a few weeks ago by a visiting Spanish couple.. literally there are so many new routes that you can accidentally F.A. one if you're not careful.

After some clean up at Lei Pi, I had but one more objective.. a beast of a roof climb, clipping 24 bolts out of the giant Moon Hill formation. 'Sea of Tranquility' 14a was first done by Alan Moore in 2007 and at the time was China's hardest route. After a long section of 5.11 climbing, the angle steepens considerably as the quantity and quality of holds gradually declines. Finally, you find yourself literally up-side down, swinging between stalactites, completely disoriented and pumped silly. The crux involves a long, anti-gravity move from an in-cut crimp to a horrible tufa pinch, which you use to swing your body 180 degrees over to a massive hanging stalactite and rosey through to grab it- upon which you can wrap your legs and completely chill. On my second attempt I was able to burl through the crux and found myself sitting on a huge hanging stalactite right in the middle of Moon Hill, peering down to Yangshuo in every direction. Brilliant. Totally unique from anything I'd ever climbed. But it was not done yet, and I had no knowledge of the last 40 feet because when I fell previously, dangling in mid air, I decided returning to the roof was impossible/too much of a pain in the ass. Pressure was on- for real.. it was my last day of good weather in Yangshuo, I was tired and felt relatively certain that I would not be able to climb the 80 feet of steep thuggy movement including the crux to get back to this spot. I had 3 too few quickdraws hanging on my harness, and some involved exit moves were directly between the chains and me. DAMN man! this is why I don't do comps.. I hate pressure! 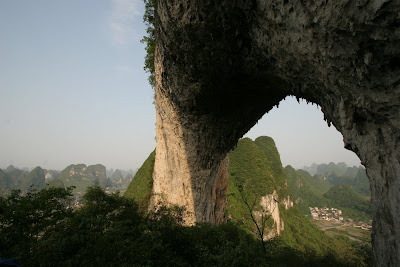 After a solid rest, I fired into the exiting, crimpy and long movement. Grabbing sometimes very questionable stone, I was nervous about my send.. but stoked on this incredible route and I knew how kick ass a success would be to finish an awesome two week trip to China's greatest sport climbing area.. I sent. Very stoked... and I was right, it was a killer way to finish the trip. Especially cause the next day's weather was less than inspirational, and the day after that I was on a plane to Shanghai.

Which is where I'm at now. Still recovering from a very long night celebrating the end of a killer year with some great friends. Shanghai is a trip- a Mega city that redefines what the words busy, polluted, huge and wild along with many others. It deserves it's own post, and so I'll keep my embarrassing New Years Photos and a city wrap up for my next blog- stay tuned.

Yangshuo was rad. Thanks to a number of hospitable and awesome individuals I had a killer time being there, despite arriving alone. The weather and access did cloud my psych in a few instances, but overall I left with a great taste in my mouth and a list of sends that I'm proud of. Thanks for all the help and love everybody! I'll be toasting a Liguan at Bar 98 again in no time..

Photos: Thanks to Bob Keaty.. A gang at White Mountain.. the right side.
The Amazing MoonHill.. Sea of Tranquility rides the arch of the cliff..
at January 02, 2010