Somebody once told me that this city was hot... and at 92 degrees on the first of April, I believe 'em. Luckily I'm on a rest day and comfortably leaning back in the far corner of the air conditioned Sahara West Library. I need a little break from the sun after an eventful week of climbing and exploring..

Before this intensive heat set in, I thankfully managed to get a little more low elevation climbing finished. End of last week I finally got a chance to get a taste of the Trophy Wall at Red Rock. In some unpleasant wind, we got out for a good day and I went home smiling after polishing off the wall. It features some area classics like the namesake and super steep 'Trophy' 5.12, the RRG reminiscent 'Pet Shop Boys' 12d, 'Twilight of a Champion' 13a and the wicked hard three move 'Shark Walk' 13a, among others. I also got to finish off the Secret 13 with 'Where is My Mind' 13c - this varied, bouldery and beautiful line takes the cake as my favorite route at Red Rock. 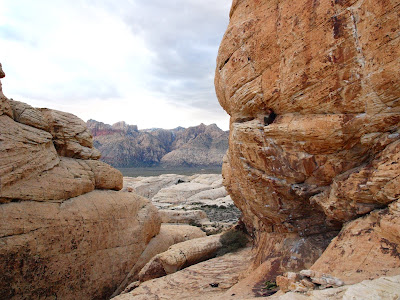 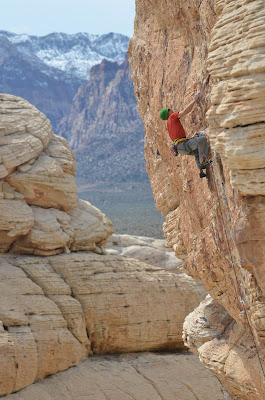 brilliant 12a on Trophy. MANN PHOTO 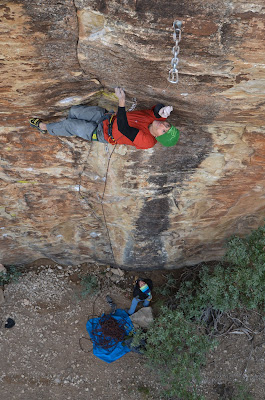 Rad climbing on Bill Ramsy's 'Where is My Mind' MANN PHOTO

Last weekend I finally got back to the VRG to revisit the incredible 'Horse Latitudes' 14a. This was the final route that I set out to climb at the VRG, and much like the rest of my experience climbing there, it was not easy. Sunday I put this Randy Leavitt test-piece to rest, and followed with the obscure, but awesome 'Deliverance' 13a and lapped 'Joe's Six Pack' 13a and 'F-Dude' 14a one more time for good measure... saying my goodbyes to the VRG. 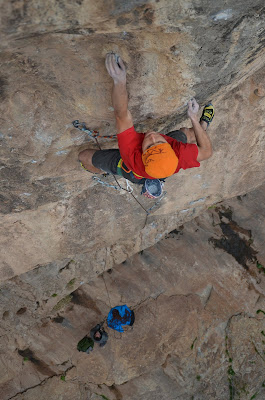 ...Above all it was a challenge for me to climb there, and I felt like every route required effort, in a way that I hadn't encountered at any other cliff. Nothing was given to me: every flash or onsight attempt ended just feet from the anchors, every redpoint required more attempts than I would normally expect and nearly every climbing day was highlighted with some degree of frustration. I LOVE the VRG.. seriously... it's one of my favorite crags, and likely some of the best limestone in America - but I will always remember my time there as something of a struggle - something that every climber encounters from time to time. It's times like this that we grow as not only athletes, but as people. Stoked to be done!

This week I made my way to the Mesquite area, ambitious to get into some higher altitude and climb on new cliffs. I revisited the Cathedral / Wailing wall for the first time in 3 years - still taken aback by it's quality. I hung my draws on the massive 'Golden Direct' 14+ and started sussing beta and making some good links. The line takes the center of the Cathedral, and climbs through thuggy, powerful terrain for it's entirety. It'll be a good challenge for me and I'm psyched to get back! I've got my fingers crossed that a seeping key hold dries out soon... 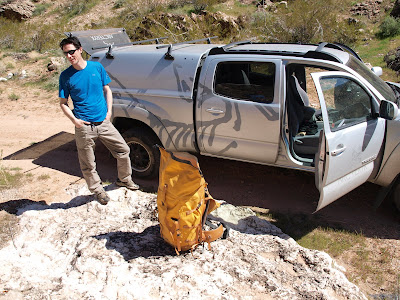 the MAN. the RIG.

I was joined by fellow Arcteryx athlete and climbing legend Scott Milton for the last couple days to try and capture some video clips around the area. We made the mistake of trekking out to the magnificent Phalanx of Will in some heinous heat - it's not in the shade if you were wondering. I had always wanted to have a look at this unique and remote feature though, and I was stoked to get a few pitches in. Highlights were a stellar 5.11 crack on it's South-East face, and the thrilling 'Fossil of a Man' 13c arete. It's a really cool feature that's worth a day - but I would highly recommend going with a friend who knows the way. 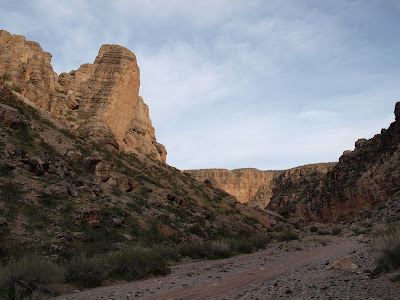 We also had a look at the Blank Wall, or Sunset Alley - home to Joe Kinder's brand new 'Tiger Blood'. I enjoyed some long 5.12 warm ups, and thoroughly enjoyed onsighting the amazing 'Movin On Up' 5.13c - featuring a super bizarre overhanging chert ladder. I onsighted a rad 13b called 'Pig Face' on some rifle-esc white limestone, and finished the day epicing on a short and heinous little 13a.. name unknown? I also jumped on 'Tiger Blood' to get a taste. It begins with a tough little 12a, to a mega rest, and then fires abruptly into a savage boulder problem on gnarly little holds.. there is a shake in the middle, and the top exhibits more bullet rock and a few more burly moves. It'll be worth some effort if I have time to get back to it. Nice job Joey!!

Good luck to everyone in SCS Nationals today! I would not want to be competing with the women's field.. some crazy strong ladies are psyched and fit to dominate.