Park Life. For those who have never been to Yosemite, the Valley is essentially a fully functioning town. There are a number of restaurants, grocery stores, hotels, hundreds (thousands?) of campsites, there is a garage, a post office, pools, and a clinic. It's not only hard to leave, it's surprisingly easy to stick around. I can completely see how people can get trapped here for an entire season... or even a lifetime. 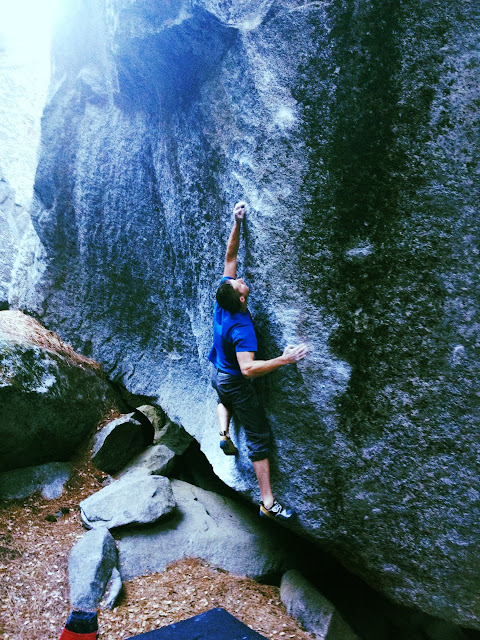 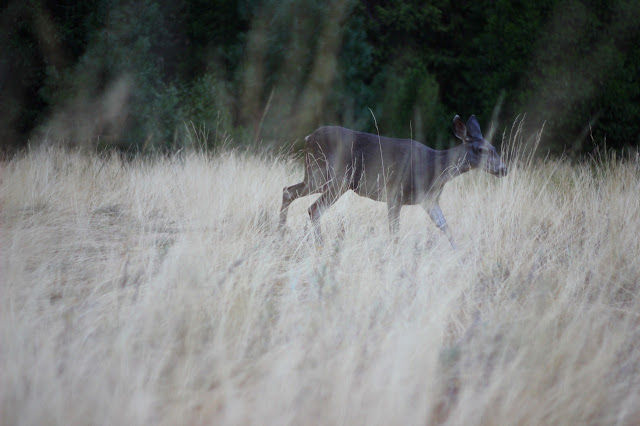 As I tried to describe in my previous post, the park is stunningly beautiful. Waterfalls, towering walls, massive trees and wildlife all around. We've been spending quite a bit of time on the wall, but when we find ourselves on the ground it's not at all a bad thing. I've been super motivated by the bouldering here - it's not hard with such a plethora of world class problems spread about an exceptional setting. We haven't rested in nearly 10 days - Tommy has been offering me the classic bouldering tour on 'rest days' and then we're back on the project. He's revisited and I've climbed a handful of incredible blocs such as, Midnight Lightning, The Force, Thriller, Hexcentric, King Cobra, Bruce Lee, Montezuma's Revenge, Diamond, and a bunch of others I don't know the names of. It's been rad. Rarely am I stoked on bouldering - but rarely do I boulder on such good boulders. 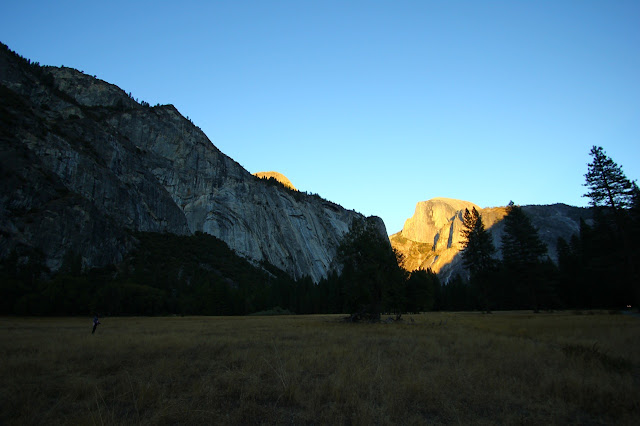 Wall Life. We began this year's journey on the Dawn Wall by climbing up from the ground. The first section of the wall is hard (the whole thing is hard), yet the first handful of pitches are surprisingly digestible -- which is likely just in comparison with the rest of the rig -- given that the first 7 pitches of the project alone would be one of the harder free routes on the Captain. Secondly we came in from the top of the wall, bringing rope, water and camp. The business on this thing ends at Wino Tower. With only 13a max climbing above, you're basically in there if you make it to Wino.

Our next step was to base from Wino, and work the pitches just below it. 3 5.13+ pitches, including an absolute STUNNER, the well photographed pitch 18, an absolute dream of a face climbing pitch. Bolt protected, exposed and super pure. After spending some time warming up to the wall, and getting a taste of the climbing, we went for the meat of the route. The mid-section contains ridiculously hard and sustained climbing, in a totally unique and brutal style that I've never encountered anywhere on any of my climbing pursuits. There are many 5.14 pitches on the project, but the bottom line for success on making this a free route is redpointing pitch 14 and 15 (aka the dike traverse), as well as pitch 16 (ballistic dyno).

We moved base camp to an aid anchor a hundred feet below the traverse. We commute by jugging the line and working the two crux pitches from a belay in the middle. We focused our energy at first on pitch 15. This beast of a pitch features a continuous beginning, with awful feet, strenuous movement and jaw dropping exposure. We clip a mix of bolts and fixed copperheads. After several days of work we've successfully beat this section of the pitch into our 13+ warmup (there's really no other option). At the end of the pitch lies a vicious boulder problem on small edges. This piece unfortunately has one crucial, arm stretching move that I've yet to do. In-fact I can't even reach between the two holds, but I'm remaining hopeful that another option will present itself. Tommy and I are linking to this move quite frequently and confidently, and Tommy is nearing in on a solid one-hang. 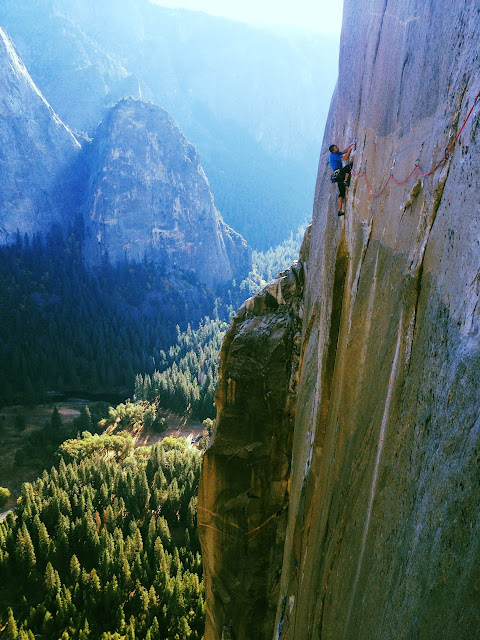 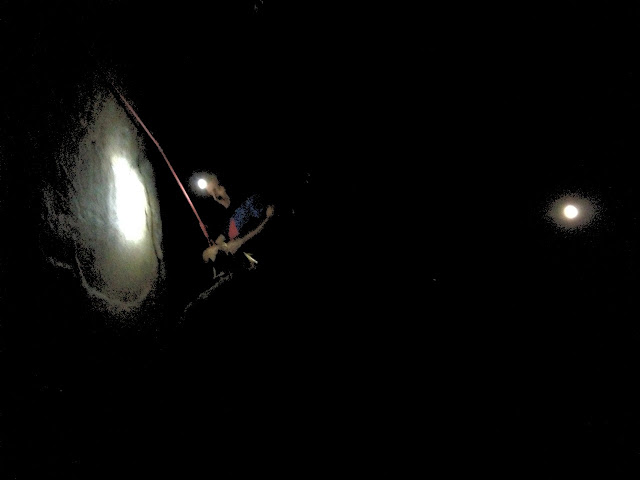 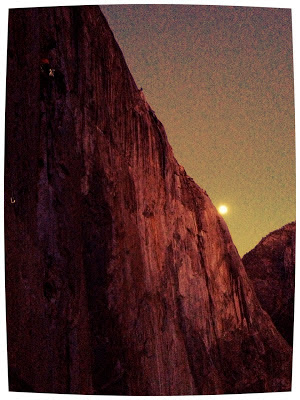 Lately we've switched modes to pitch 14 - this is the pitch that shut down Tommy's efforts from the ground two years in a row - so redpointing this thing is a top priority. This short pitch is packed with difficulty. Three distinct, very hard sections make up the climbing. I said this morning that this pitch probably has the most intensive footwork on rock (perhaps an overstatement), but as for what I've seen, I stand by my statement. The sequence of climbing just before the anchor is the hardest, which climbs through impossibly thin edges and poor, well spaced feet. Although my psych was waining a bit from repeat failure at the reachy ending of pitch 15, now after 2 days sieging pitch 14 and making some great progress, my stoke is back up. We've decided that this is likely the hardest single pitch on the route, and in my experience is well in the 9a range. It's kind of ridiculous really. Climbing such insecure, super difficult terrain with 1300 feet of air beneath your ass.... it's sick. 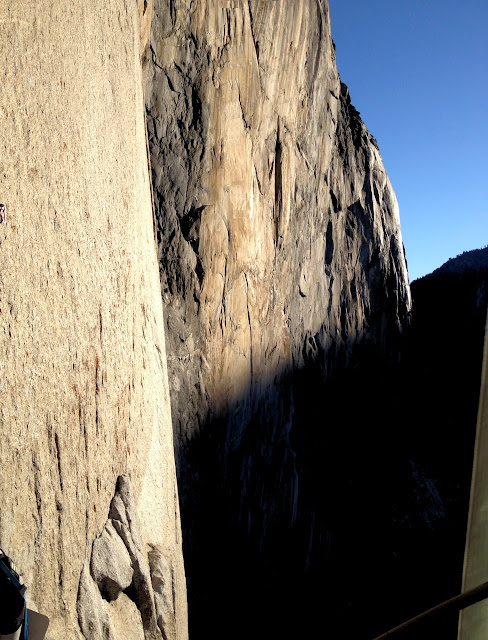 It's been so damn rad to climb with Tommy on this thing. We each bring something unique to the project -- unique vision, strengths and stoke. He's been a driving role model of mine for many, many years and it's been a total pleasure to spend so much time together. I've had my moments of doubt, as I know he does too, but a project this huge - this insane and this hard - something about even just trying your best is super rewarding. I'm starting to see the cycle; when your skin is thrashed, your whole life smells like urine, you're mentally exhausted, thirsty and hungry, you can't wait to have dirt under your feet. But then you get a shower, eat some good food, check facebook and a few hours later, you can't wait to get back on the wall.

....in other news. I've just gotten word that our film, 'Viva La Vie' that I made this spring in France with Andy Mann, Nina Caprez and Keith Ladzinski will be touring the globe with Banff Mountain Film Fest. Andy cut a sick trailer-- check the dates and see the whole feature in a theater near you!!!