The final frontier.... well... maybe not quite, but it sure feels like it. I've always held a special place in my heart for Wyoming, especially the Lander zone, so naturally when I heard about a mythical new crag with featured 40 meter walls, a burly approach and miles of potential, I listened. 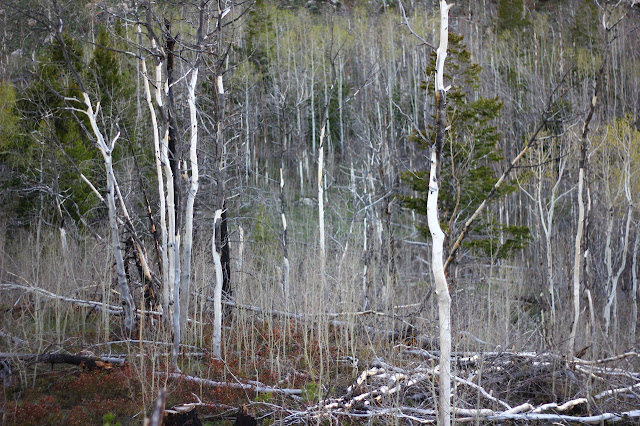 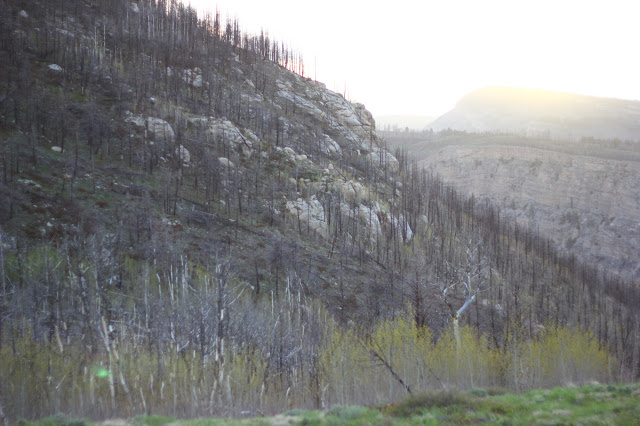 Wolf Point. I'd heard the words here and there, but it wasn't until a beer infused conversation at the International Climbers Festival last year that I really got the low down. Anyone who knows pocket-master B.J. Tilden knows that he keeps his vibe regulated at cowboy cool for the most point. Not that he's a downer at all, but when I saw how fired up he was about Wolf Point one warm July evening at the Lander Bar, I knew that this could be a legit crag -- and immediately the gears started grinding about my return. 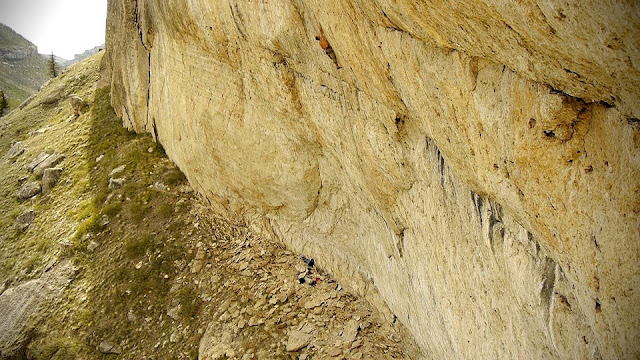 Then after I saw this photoBJ's review of his test-piece 'Kill em All', I was locked in. I planned to make it out to Wolf Point last fall, but I got sucked into the Fins... well... I finally made it, and I'm in it to win it.

I'll be hanging about Wyoming for the next two months. Getting my fix of the frontier, climbing on burly dolomite pockets, exploring and learning a thing or two from these modern cowboys. I love the scene here. Lander has always felt like a very authentic place, and the community out here is a crew of solid characters. No bull-shit. Just hard ass climbing and plenty more where that came from. It's refreshing.

Okay so Wolf Point... Todd Skinner and others of course checked out this crag back in the day but it was not his preferred style - and with so much more around to develop he decided to focus his efforts elsewhere. It wasn't until the mid 2000's that long time Lander local Steve Bechtel made the demanding trek to Wolf Point and sunk metal, creating the walls first 4 routes - only to be more or less forgotten for nearly 10 years. Others had checked out the crag, but with an intimidating approach and plenty of hard work cleaning and bolting, it stayed quiet at Wolf Point until last year. The crew rallied and started rapidly developing. Kyle Vassilopoulos, Tom Rangitsch, Vance White, Tilden, Bechtel and Zach Rudy really jump started the efforts and within a season the crag had plenty of metal. Now the second season is off to a killer start, with plenty of projects to be finished, new lines going in, and routes to be climbed and cleaned. 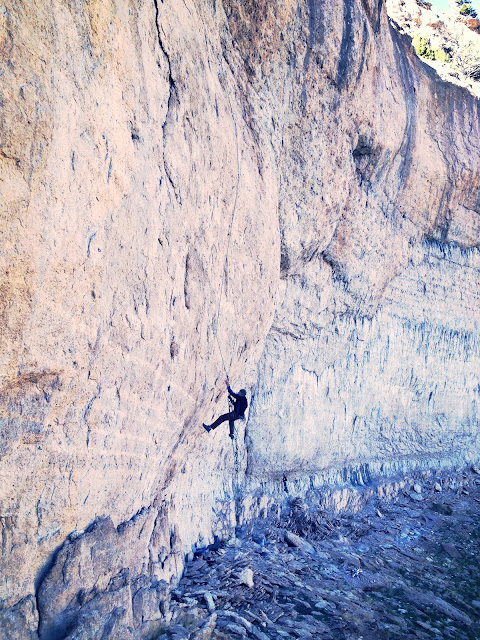 The drive in is no joke - 30 minutes on pavement from Lander, followed by 30 minutes on rough roads. The hike in is no joke - on foot you descent 1500 feet to a river crossing before ascending over 1000 feet to the cave. It's a solid 45-60 minutes of serious hiking both ways, off the top of my head I can not think of a more brutal approach for sport climbing in the country. It's mostly south facing so the sun can be brutal. The cave is seemingly a sanctuary for rattle snakes, and one unfortunate climber has already been bit this year. The walls are dirty and tall. New routes take serious cleaning and effort. It's true cowboy country out there.

Okay now, before you turn the page, here's a taste of the brighter side... The crag is immense. It's very reminiscent to the Killer Cave in Sinks Canyon, but 50% taller, 30% broader, and generally more sustained and much more difficult. It's pumpy, pocketed, and burly. On the flanks of the cave is room for literally hundreds of 30 meter routes -- mostly moderate terrain. The sun bakes the crag but late afternoons and evenings are shaded and magical. The rock is very high quality below the filth, and produces amazing movement and holds. The tallest part of the cave likely requires a 90 meter rope to lower - and it overhangs it's entire length. Every route I've climbed there has been, yes, a little dirty, but down right incredible to climb on. There will be a very high concentration of 5.13 and 5.14 pocket pulling test-pieces here. As it cleans up, I predict this could be one of the better crags for hard climbing in the West. Since I arrived last week I've climbed 'Kill em All' 14b, 'Alpha Male' 13d, 'Twice as Loud as Reason' 13a/b, 'The Beholder' 13a, 'Remus' 13b+, and 'King Thing' 14a ... all of these routes are sick, and we're adding more routes every day out. 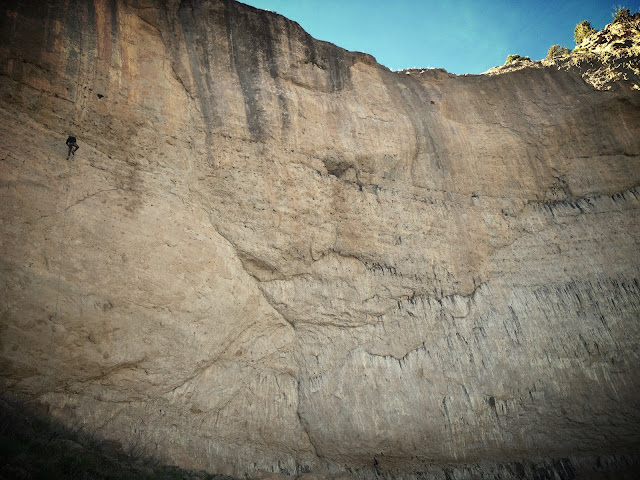 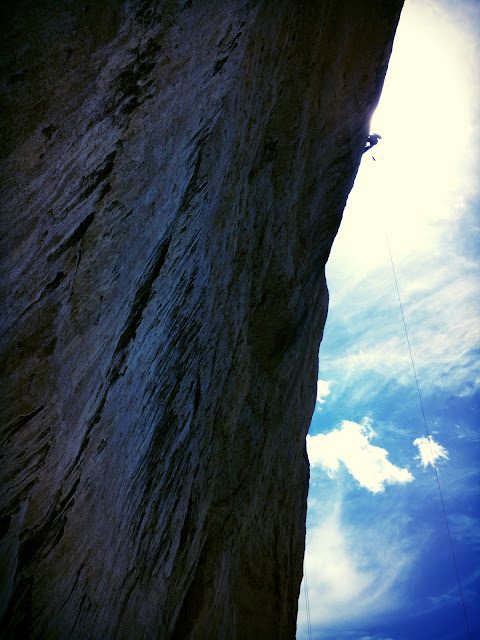 Bottom line is, this crag is sick and despite some clear downsides, we remain stoked. As BJ said 'I'm more motivated with each visit here'. That says something. Crags take tons of work, and this one definitely still needs work, but it's turning out to be something really special. Wolf Point baby... come get some. 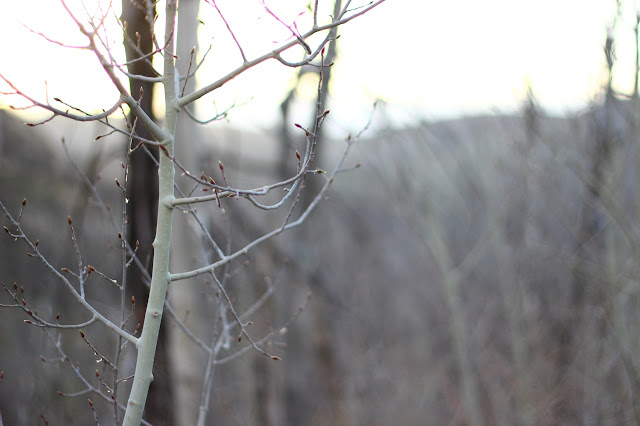 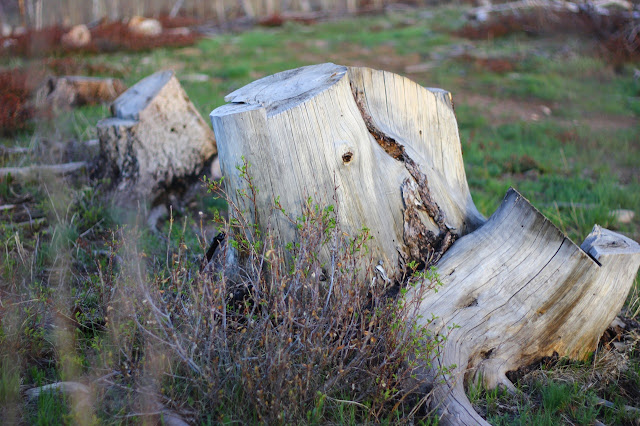 At the moment I'm out in Moab, UT doing a photo shoot with the rad dudes at Smith Optics. We're having a ball playing in the sand, climbing and bronzin'... Check back for updates on the week in the desert!