First taste of the Valley

Yosemite Valley. Kind of a big deal. I had hoards of expectations coming here - certainly about the place, the scene, the history - but also about this incredible, humongous project that I've been roped into. I travel non-stop, always seeking out new crags, meeting new people, learning along the way. But in a way I always stick to at least somewhat familiar territory. This past week, however, has been a whirlwind of new experiences and I'm learning and growing in ways that I haven't perceived in many years. Just when you think you might know what rock climbing is all about, jump into something totally new and surprise yourself -- there's always more to learn. 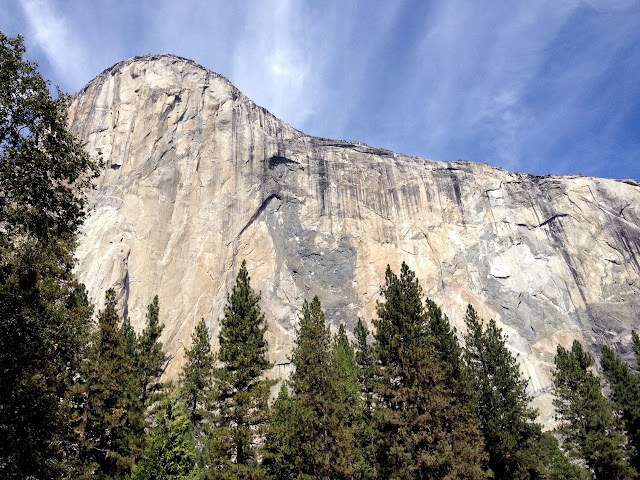 Literally the day I arrived here--- met Tommy in El Cap meadow, and we busted up to the project. The first pitch of the Dawn Wall project would be my first climb in the Valley -- a gnarly, hold less, slick as ice 12b slab. So much for intro. I flashed it, which I was very proud of, and from there it got dramatically harder.

When you round the corner into Yosemite Valley something silently looms overhead in a way I haven't ever quite experienced. El Cap is so freaking massive that it occupies a space in your periphery similar to the sky. A broad larger-than-life wall of stone, splits the horizon far above the trees and dominates the landscape. You can't look away.

A number of years ago I can remember peering up at steep, tall sport crags and literally feeling fearful and anxious. Stressed to imagine anyone ever climbing up something so foreboding and intimidating... and hard. Since then I've learned to not only seek, but love and embrace this quality of cliffs. My first view of El Cap brought about a very similar reaction- the first time I've felt visceral intimidation just from looking at a cliff in over 6 years. It's a powerful piece of granite. 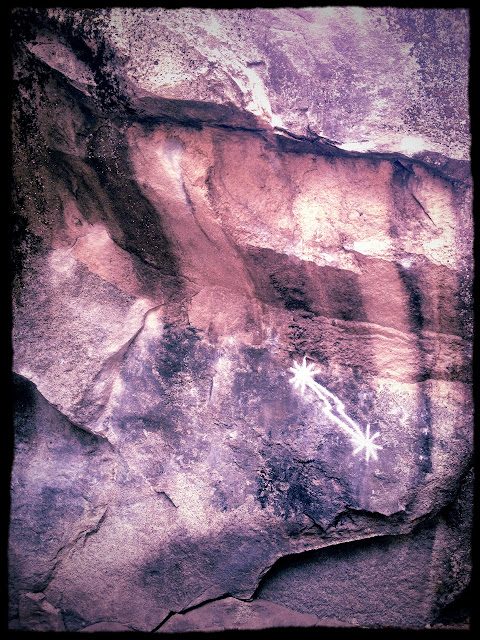 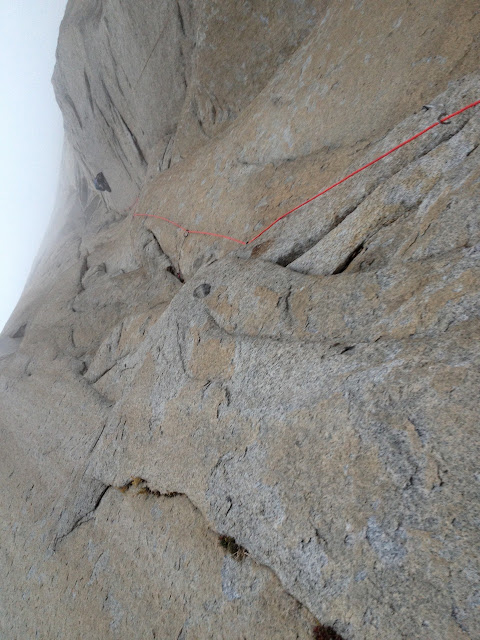 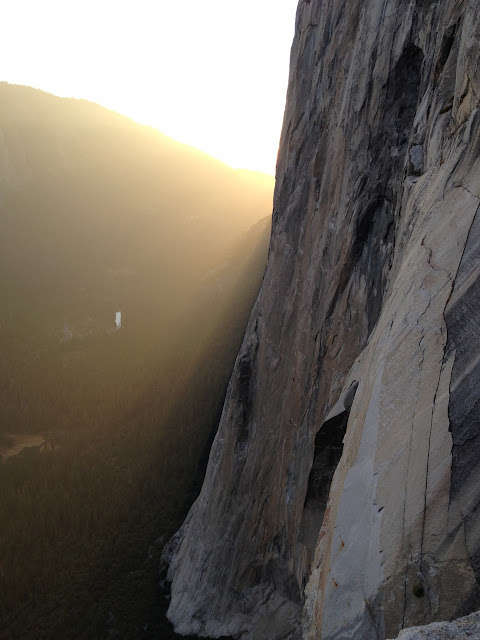 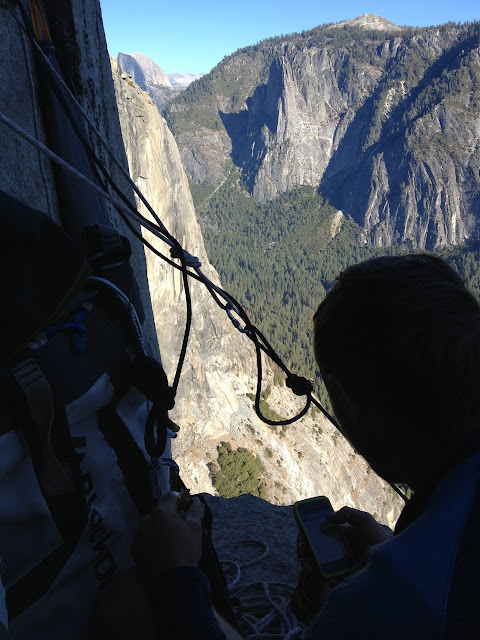 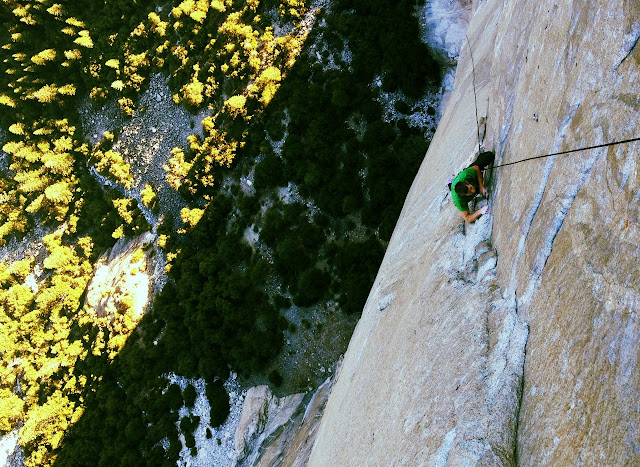 Everyday I'm taking in tons of fresh information - from simply navigating the labyrinth of one-way streets in the valley, to learning new names and faces, to setting up a portaledge, to climbing endless walls of slippery granite. It's been totally awesome. The Valley is a totally magical place, and I'm quickly coming around to it. I think I see many more trips here in my future.

As far as progress on the route, I'll get into more details in my next post. I've visited a solid percentage of the hard pitches, and although the difficulty is staggering, and unbelievably consistent - I can definitely see it happening one day. Tommy's dedication, vision and motivation are unrivaled. His work in the Valley over the last 12 years, and his efforts on this rig for the last 4.5, are deeply inspiring to me. It's been really cool to share a portalegde and many-a-conversation with my climbing hero in the middle of perhaps the sickest climbing project on the planet. I'm very excited about the coming weeks, no matter how much more suffering, ass-kicking and skin thrashing we have in store for us. (read: a lot).

Stay in touch here, and also on my twitter account -HERE- I'll be posting photos and updates from the wall, and the Valley floor as the season carries on...
at October 18, 2012

Every bit as fast as I unpacked, I'm all packed again. This time I'm in for an exceptional adventure. About a month ago, Tommy Caldwell, emailed me to congratulate my success repeating his 'The Honeymoon is Over', and asked if I'd be willing to put my plans for the Red aside and join the effort on the Dawn Wall in Yosemite this October. Despite my reservations, seemingly unpreparedness, excitement to return out East, etc, etc, etc, I knew this was the opportunity of a lifetime. Just to be asked to join him was an extreme honor, and I knew that I couldn't say no.

Immediately, I began gathering gear, looking ahead and attempting to empower my nervousness into stoke all the while trying to stay focused on my goals in Idaho. Thankfully it's all come together, and here I am, literally about to hit the road with a truck full of gear, canned food, warm clothes and a pile of climbing shoes. I feel very, very excited to get on the wall and experience such a futuristic project first hand. Tommy has long been a huge role model and inspiration of mine and to team up with him on his biggest project to date is seriously a dream come true. Kevin Jorgeson is taking a separate road for the rest of this month, heading down the Grand Canyon on a long awaited family trip, but I was stoked to hear that he'll be joining us on the wall in early November for our push. Truly a bad ass team! I could write about this upcoming adventure for hours, but honestly, I gotta hit the road! We'll be on the wall this Wednesday....  wish us luck!!

When my sponsor Climb On!, offered to send me to Kalymnos, Greece for the Climbing Festival a month ago I obviously accepted, but I had no idea what to expect. I couldn't say no to an area I'd heard so much about and an event that was promising to be kick ass. Regardless, I got my tickets lined up and then sunk into my then current climbing goals, somewhat forgetting about my upcoming week long trip to Europe. 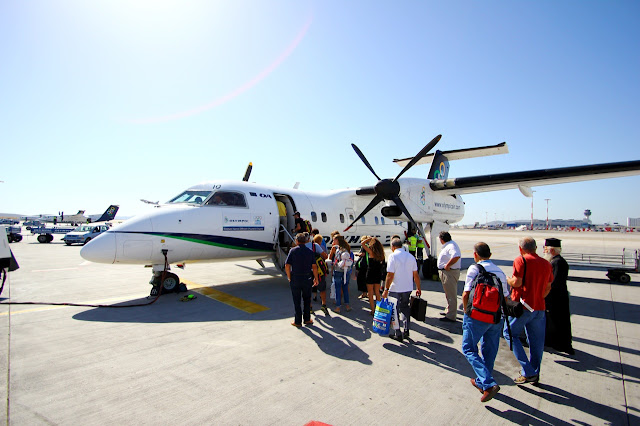 Suddenly, after finishing up in Idaho and then a punishing wedding weekend I realized, 'whoa, I leave for Greece in a week…? seriously!?' A week in Boulder taking care of domestic type stuff, seeing old friends and spending time with my folks is not a long time. I packed my bag. I was on the flight. Within an hour after my arrival in the afternoon, I was full throttle moto cruising with the beating sun on my face and Aegean Sea breeze ripping across my body. Shortly thereafter I was signed up for the event competition (something I remember reading about but had no plan / desire / interest in doing) and being told that I would need to wake at just after 5am the next morning.

I avoid comps. I've never felt at all driven by competitive energy, and although I know many people that perform their best under this very specific type of pressure, I don't. I think it sometimes brings out the worst in people, honestly. But it was the best way for me to be involved with the event, so, I went with it. Not so bright but very early the next morning my buddy Sam Elias - the only other American athlete - knocked on my door. The comp had actually started the previous day, so he knew the way as we hiked 30 min to the crag (a huge approach for Kalymnos).

It was super hot. The whole trip. It's not quite Thailand hot, but it's definitely nearing the realm. The comp routes were on a new sector and the rock was definitely sharp at spots, so skin got thrashed …perfect event for Climb On to sponsor… Day one I sent one of the 4 mens routes and got a try in on another one before the sun crushed the wall. The climbs were really cool. Slowly I introduced myself to the other athletes - some of them I already kind of knew - most I didn't. Names that anyone would recognize, and naturally, I felt small in comparison. We were competing with each other, I was definitely an outsider to the group and I was new to this whole thing - not to mention jet lagged. 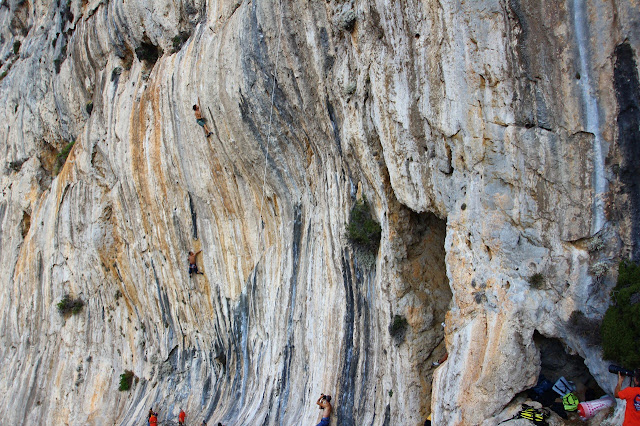 When I'm around what I feel is a competitive vibe, I usually turn to an introvert, which is unnatural for me. I'm not trying to prove anything and if I'm around people who really want to be the boss - I'll happily let 'em have it. Countless times in my life I've felt belittled or condescended by 'the boss' and at this point, I'd rather completely avoid it, and moreover, entirely remove the potential of me becoming one myself. But gradually, I realized that these people were not trying to put anyone down - in some ways I just expected such a prestigious crowd of climbers to be cocky and lame, but I was totally wrong. Over the course of the 4 days it became super clear. I made some super rad new friends. We climbed together, we partied together, we hung out, ate and talked together. This is by far the best thing I experienced from the event - the people - for sure the athletes, but also simply everyone involved. It could have easily been a competition, pressurized, machismo vibe - but it was nothing of the sort, we went out, and climbed together. Everyone stoked for everyone else, cheering everyone on, and giving the massive crowds what they came to see - enthusiasm, sick sends and sports action! Check out this cool short video below for some more images, highlights and details from the comp.

The climbing in Kalymnos is varied, and wild. The comp sector was super cool, albeit a little sharp for the conditions. Some walls (like the comp sector) are near vertical, with blue stripes, colonettes and pockets, edges. Others, like the vast and impressive Grande Grotta, are huge caves with shockingly bomber stalactites (some hanging 15 or more feet from the wall) that make climbing a massive 40 meter overhang accessible to the 12+ climber. It's nuts. We spent the last day of the trip in the Grande Grotta, where I did a handful of mega classics from 7c-8a. I lowered to the ground drenched in sweet, hands red from jugs in thermal heat, but laughing from the experience. Some rigs require over 25 quickdraws. An 80m rope is a must if you want to climb on formations like this. It's very unique and hard not to enjoy. 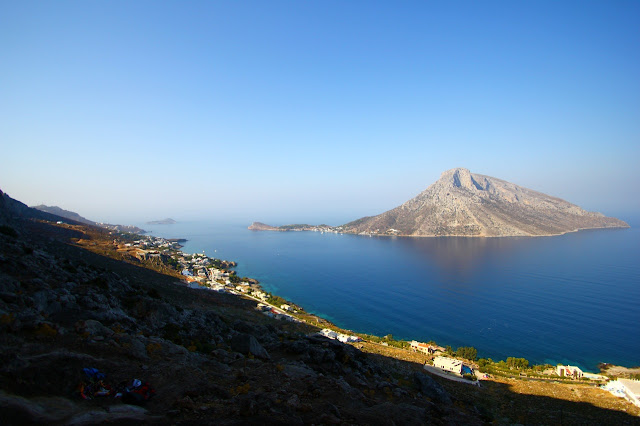 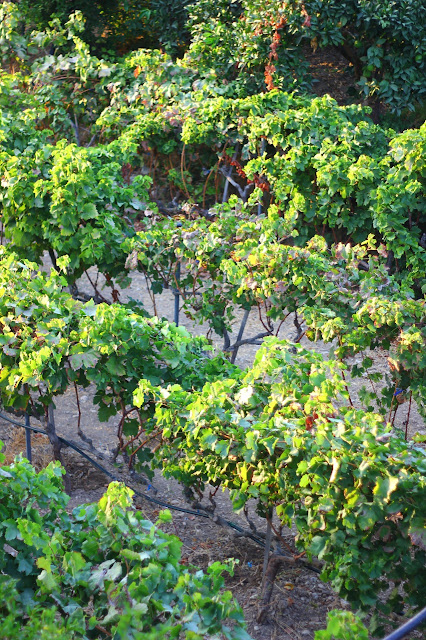 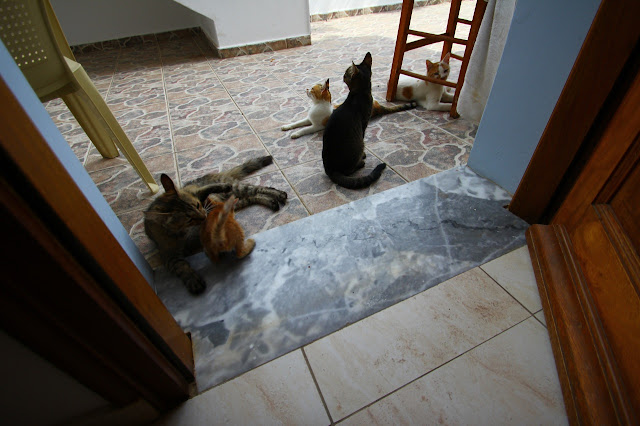 The island is beautiful, no doubt about it. Rad little secluded beaches, nice teal blue water. Killer views everywhere. People are helpful and nice, food is good, life is generally inexpensive. Kalymnos is really a vacation climbing spot, not a core climbing spot like Céuse or the Red or the VRG. Climbing will give you something to do all day, but it's the whole package that is so magnificent. Go to the beach, rip around on motos, see the whole island, eat food, get a tan, stay up all night, etc. It reminded me of Southern Thailand in may ways, but with perhaps a more desirable climate, completely different cultural value and what seems like a lot more potential. 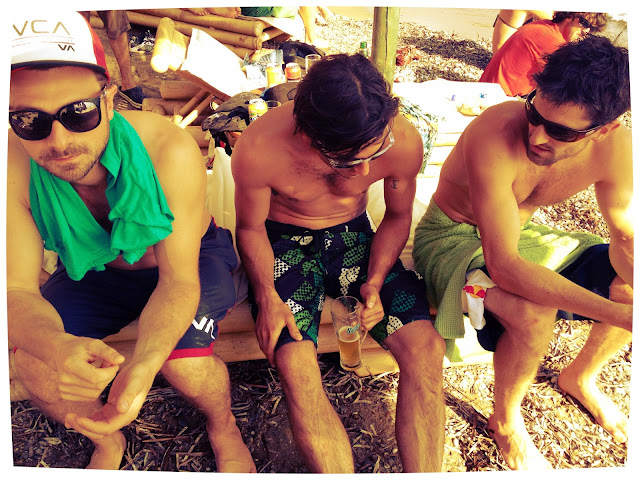 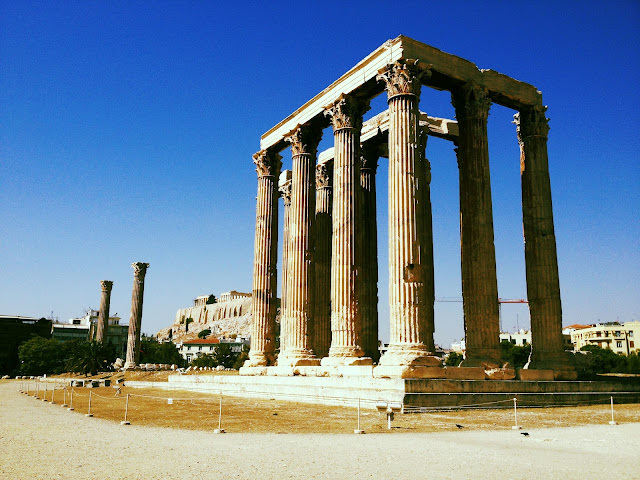 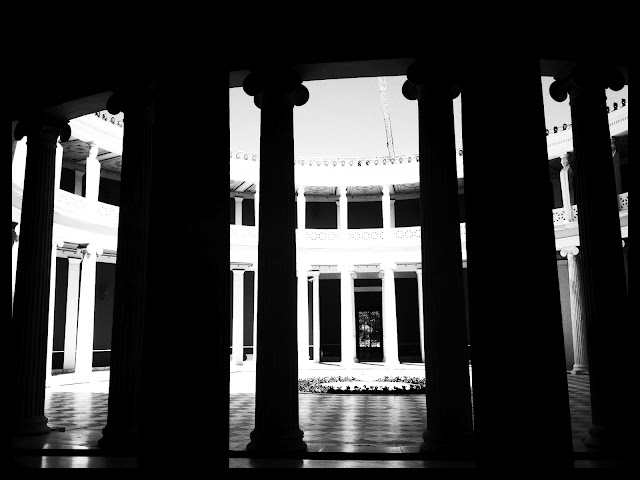 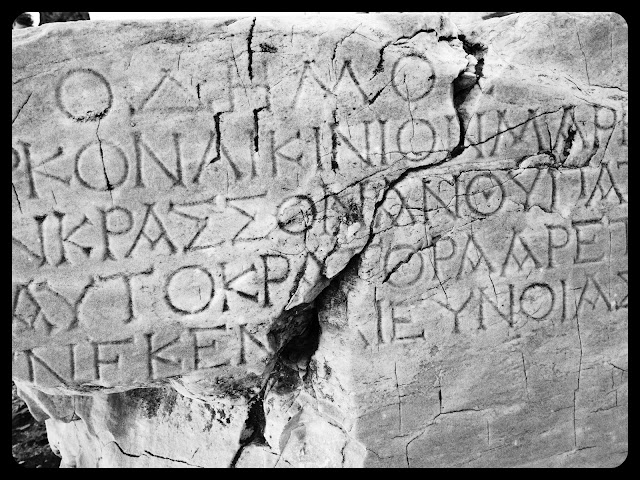 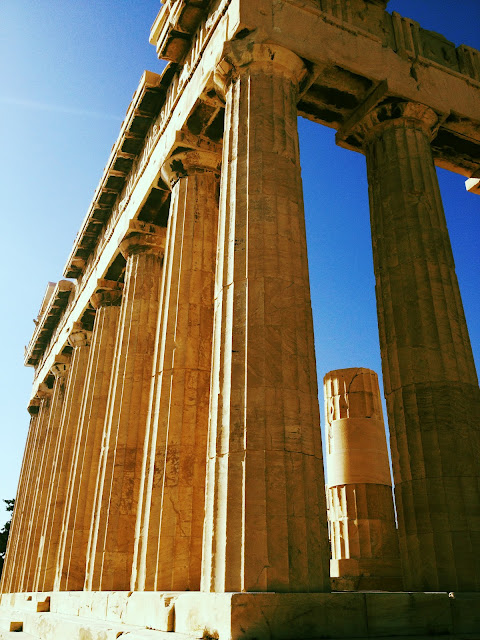 It was a very rad trip, I'm super stoked that Climb On got involved and brought me out to represent. Really, too much happened in such a short time that it would be tough to convey details in a post. The moral is - I met some amazing new people, checked out the Kalymnos climbing scene, and participated in a very well put together, seemingly flawless event. Hopefully the photos do some justice to this incredible place, and next time we met - ask me for a story from Greece. Fingers crossed that Climb On sends me back next year!! 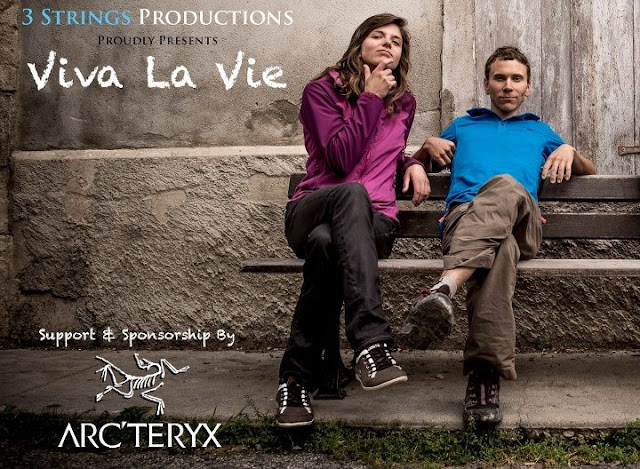 Now I'm on my way back to Boulder for a quick stop before I take off again for the big fall objective next week. I'm really excited to announce that I'll be presenting the premier of our really cool short film, Viva La Vie, this upcoming Saturday at the Adventure Film Festival. Andy Mann, Keith Ladzinski and I will be at the Boulder Theatre to introduce this colorful 24 minute film showcasing the incredible variety of the Verdon Gorge, France. There's word that there may be a Q and A afterward as well. The show is at 6:30pm, again this Saturday the 6th of Oct, hope to see you there!!!
at October 03, 2012