It's hard to believe that we were only in Wyoming for a week - In-fact, I've had to recount the dates a number of times just to make sure. Long climbing days, socializing with old and new friends, clinics, parties, a slide-show, good food, and some sleep when we could find it... it was a killer week, but we're certainly exhausted.

After rolling into Lander Thursday night, my buddy and WY climbing legend B.J. Tilden offered to give us the tour of a new crag he'd helped develop called the Sweatlodge. This totally unique feature is something of a cave - almost as though a piece of the cliff was severed and then tipped backward - creating a super steep wall that remains shaded all day (exactly what Lander locals are fiendin for). It's a small crag (especially with a dozen climbers and 6 dogs) but it has got a variety of climbing styles and grades. I was primarily interested in a 14a that B.J. did called 'Plastic Shaman'. It's a burly little line - a true power endurance test-piece with essentially no place for resting. It's difficulty increases steadily, ending with a series of big moves just below the lip. I was really pleased to put the Shaman down third try - it's a little Wyoming gem for sure. I flashed a really nice 13b called 'Training Wheels' to finish the day. 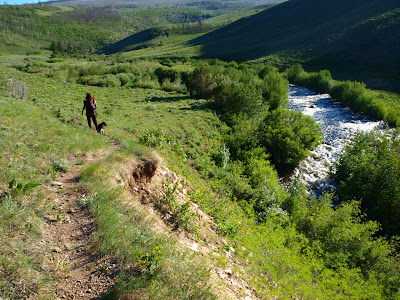 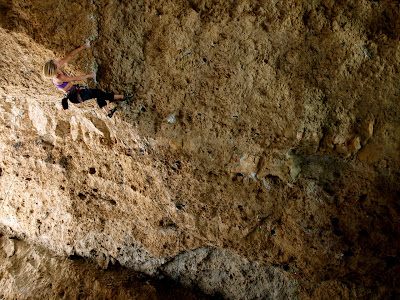 Lindsay Gasch putting a hurtin on 'Training Wheels' 13b, 'Plastic Shaman' climbs the steep wall to the right 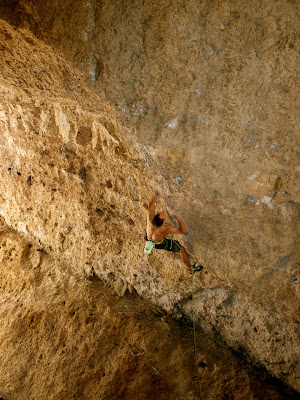 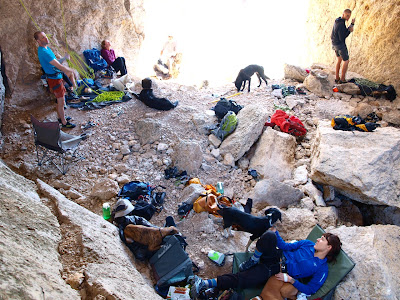 We made it back just in time to catch the last half of the Dyno comp and enjoy a beer at the Lander park. Saturday was the first day of my redpointing clinic out at the Iris. I ended up with a rad group of psyched climbers - everyone of them fired up to put in effort and learn something. I stayed out at the crag until the last minute - hurriedly returning to Lander to put some finishing touches on my slide-show presentation that night. Despite suffering a slight and momentary loss of my voice from a long day talking at the crag (nothing a cold beer can't fix), the slide-show went off well and was well attended. It was a pleasure to address this crowd and show off some images and video clips of my last year. 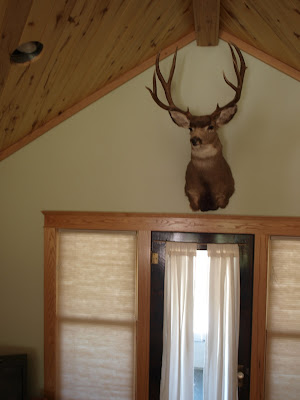 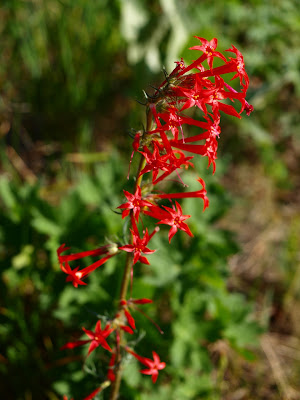 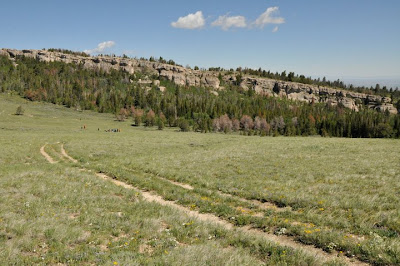 Sunday my redpoint clinic finished up awesome, with a number of the group having breakthrough sends, even after a long weekend. I tied in myself as well, and bang'd out a dozen pitches in preparation for a long day on the road... gotta love the Iris. Short, powerful, fingery... straight up cowboy crag. 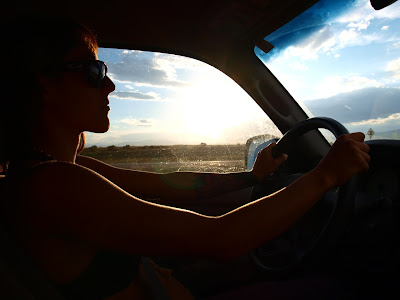 Now I'm back in Seattle.. just a few weeks but thousands of miles later. I bought my pickup truck at the end of May, and I've put over 6,000 miles on it already - glad I got a Toyota. We managed to hammer out a few evening pitches at Little Si last night on our way in. I jumped on Ben Gilkison's 2010 'Wide World of Fitness' out of curiosity and surprised myself when I clipped the chains, fighting a pretty severe pump towards the finish. Ben suggested 14c for this line that shares the majority of 'New World Order' but replaces the 14b beginning with a pumpy 13a. This is certainly a worthy, and massive route, but I think in comparison I must respectfully suggest solid 14b. Regardless - great effort Ben, this route is HUGE!

STOKED for the Arcteryx Squamish Mtn Festival, fingers crossed for some good weather as we take off for Canada tomorrow. YES.