Early last March I wrote this blog post. At the time of writing I didn't know it, but I was close to giving up. The heat soon became overwhelming and it was not long at all before my efforts were futile. I got a late start trying the route, I had a rough time finding a solid partner, and my stoke gradually declined as I found myself driving northbound on I-15 again and again, making the same hike, returning by headlamp and doing the same warm ups in escalating heat. Projecting can be mentally exhausting, and this (last year) was my second year returning again and again to Arrow Canyon.

I love the place. I've certainly spent a fair amount of time there. I've dragged so many friends in there to show off its unique beauty, mind bending potential and its amazing climbing. I trained pretty hard through this past December anticipating my return to Arrow along with my remaining list of goals for 2014. Maybe it was a renewed psych, much better temperatures or maybe it was the hours spent on the hangboard and countless laps in the gym -- but something worked. The route felt considerably easier from the beginning. I made some great links on day 1, by day 3 I had two back-to-back 1 hangs and last Friday I finally ended my journey with this climb. La Lune was born, and my multi-season campaign in Arrow Canyon, on 2 neighboring and absolutely stunning routes, came to a beautiful close. 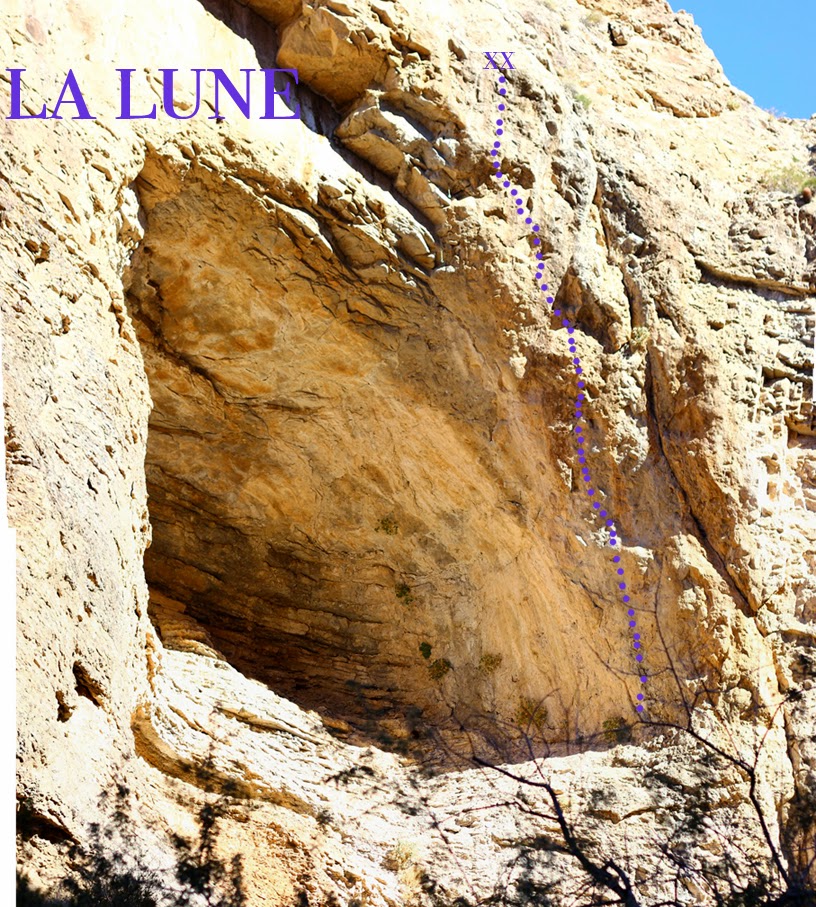 Obviously I feel elated. I invested so much in this route and spent so many hours in 2013 dreaming about it. It was very difficult for me to walk away without success last year. It feels strange to have it done now, especially considering how damn hard I thought it was after last season. Could I have improved this much? Maybe I was completely destroyed mentally and physically last season and all I needed was a fresh start? I'm really not sure to be honest, and after being prepared for war against this seemingly undefeatable opponent, to claim victory after such a short battle almost seems unfair; it's almost as though I wanted the process to last longer.

Climbing is such an interesting and varied pursuit, and likewise my experience with every major project has been as unique as the routes themselves. La Lune [9a] is free now, and my time in Arrow canyon will become mostly a memory - which is both exciting and saddening. I'm very proud of this route, and stoked to share it with the community. It really is one of the best out there.

Thanks so much to everyone - all the amazing friends - that gave me support and belays over the years in Arrow, it's been an amazing pursuit! I really, really appreciate it.

Plenty more to do around here... on to the next project!